There are few more imposing buildings on the banks of the Loire than the Église Notre Dame des Ardilliers. Sketched by Turner during the 1820s (but, to my knowledge, sadly never painted by him) this magnificent chapel would not look out of place in the centre of Florence such is its grandeur (oh, alright, the slate tiles of the dome would be at the very least a touch incongruous, but you get the idea).

On a back road, in the shadow of the église’s munificent dome sits Le Pot de Lapin, home to chef-patron Olivier Thibault who once ran L’Escargot in the very centre of Saumur. He has been here since 2007, and business is brisk. Sauntering past quite early on a Tuesday evening we enquired about the possibility of a table. Not a hope sur terrasse, was the answer – even on a Tuesday evening Olivier is nearly booked out – but we bagged a table for two inside, in handy view of the blackboard menu. 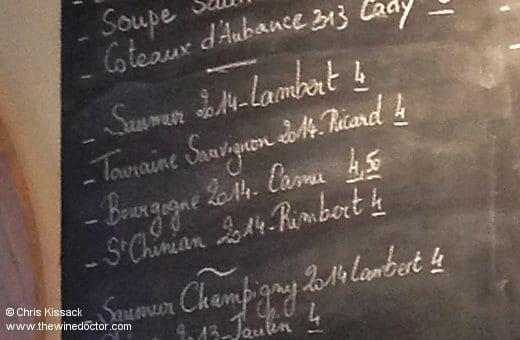 This is informal dining, with a focus on tapas-style dishes as well as more traditional entrées and plats. We decided to drink by the glass, so kicked off with matching glasses of the 2014 Pet’ Nat’ from Vincent Ricard, and to keep them company we tucked into a selection of tapas, including rillette de macquereaux (mackerel rillette) which was pretty rich, quite dense, and for a ‘lighter’ tapas was leaning towards being a little too heavy and large in portion, a brochette de gambas (a grilled mini-kebab of prawns) which were delightful and disappeared in the blink of an eye, and an assortiment de poulpes et crevettes panés. This latter dish, octopus and prawns in a light tempura batter piled up in what looked like a capacious tooth mug, was also a highlight. A glass of the Vincent Ricard Touraine Sauvignon Blanc 2014, a perfumed and aromatic reminder of what this variety is capable of, went down well in this instance.

Olivier is the factotum of Le Pot de Lapin, taking orders, translating as required (I have to confess poulpes had me stumped), popping corks and serving drinks to his clientele (mostly locals but with two tables of English – although somewhat off the beaten tourist track I hear the venue has been popular with Brits ever since it was written up in the FT by Nicholas Lander back in 2010) taking orders and even sorting out the bill. Thankfully he also finds time to cook, and next up he brought us an entrecôte grillée, a slab of meat you could surf on, with good flavour but a rather sinewy bite, although a small mountain of frites easily made up for this minor misdemeanour. The peppery-peppery-peppery sauce au poivre was delicious with both, my only complaint being that there simply wasn’t enough of it. Somewhat superior was Olivier’s souris d’agneau braisée (lamb shank), the tender meat sliding off the bone as soon as you tickled it with a knife. Now was a time for Saumur-Champigny of course, and the 2014 from Domaine Saint-Just did the job, although it felt rather more stony and lean than I would have expected from such a benevolent vintage.

Leaving the restaurant, the tables sur terrasse – all vacant when we arrived – were now all occupied. Oliver seemed unfazed, running a not-quite-one-man-show (there was at least one other waitress, but I think that was it) of a restaurant with impressively cool composure. With largely fine food, friendly and efficient service, and an interesting wine list to match, this is one Saumur restaurant that is on my ‘revisit’ list.