The Gardener’s Cottage is located in Royal Terrace Gardens, close to the beating heart of Edinburgh. Both Royal Terrace and Regent Terrace (the latter so named after a visit to Edinburgh by the Prince Regent in 1822), as well as the gardens and the titular cottage which sit below them, were all designed by William Playfair, Scotland’s leading 19th-century architect. A single-storey cottage, it is double-fronted and yet typically diminutive, and the proprietors Dale Mailley and Edward Murray have done well to squeeze in two dining rooms and a Lilliputian kitchen wedged between them. Diners eat communally, on long wooden tables, which makes it too easy to eavesdrop on neighbours’ conversations. I didn’t intend doing this (honest, guv), the words just floated across the evening air to my ears, and if it looked like I was straining to hear then I’m sure that was just my lumbago playing up. To my right, a rather dull lady who was thankfully replaced mid-evening by a more entertaining blonde from Romania with some unusual food allergies. To my left a gaggle of indiscreet trainee radiologists, who unwittingly enlightened me to the antics of their pal ‘Full Frontal Jeff’ as well as broadcasting some barbed opinions of their senior colleagues. Yes, the entertainment is free at The Gardener’s Cottage.

Back to the food. There was once a time when professing ‘seasonality’ as an inspiration would have seemed novel and exciting. These days it is perhaps rather more hackneyed, nevertheless that is the mantra here at The Gardener’s Cottage. The path leading up to the surprisingly large front door – in fact, the cottage isn’t quite as tiny as it looks from the road – is lined not only with snowdrops (it was February, by the way) but also beetroot and other leafy winter vegetables. I’m being vague not because I don’t know my brassicas, but because it was cold and the path was very poorly lit, and I wasn’t going to spend all evening staring into the gloom at turnip leaves and lovage. All the same the garden is significant because it is from here, in part at least, that this seasonal inspiration and indeed many of the ingredients originate. 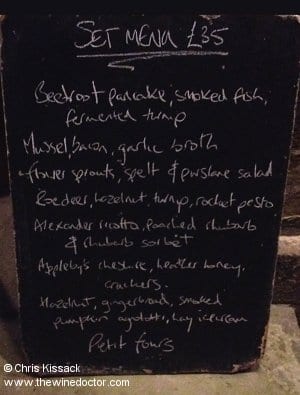 Lunch here is à la carte, but dinner is a set menu, seven courses showcasing dishes that are, if nothing else, at least original. Dinner it is then. Kicking off, I started with a beetroot pancake with smoked fish, fermented turnip, crispy kale and yoghurt, which was an underwhelming start to the evening. The smoked but otherwise anonymous fish (can’t wait for my course of ‘cooked meat’ with vegetables later), tiny flakes of white, had a beautiful texture and a firm but not overpowering smoke to it. The fermented turnip added an interesting bite in contrast, but the beetroot pancake, a purple pebble of vaguely beety dough, left me thinking that this gem of the winter months must have been put on this earth for some purpose other than this. And what the yoghurt was doing here was a mystery. It was like the last meal in Mother Hubbard’s house, in which incongruous ingredients suddenly find themselves thrust together on a plate simply because they were the only four items that remained uneaten, their consumption leaving the cupboard in the requisite state of bareness.

The dishes disappeared, thanks to the friendly staff who seemed proficient at their two allotted tasks, first keeping the diners happy, second keeping the vinyl spinning on the old recorder player tucked into the fireplace. Next up was a broth of mussel, bacon, baby leek and garlic, which was good enough I suppose. The broth was fairly subtle, and in truth from these ingredients I was expecting a little more punch. My third dish, flower sprouts, spelt and purslane salad was similarly uninspiring. Full marks for use of interesting and novel ingredients, because I don’t recall the last time I ate purslane, and I am quite certain I have never eaten flower sprouts, a cross between Brussels sprouts and kale which some have hailed as the next vitamin-rich, life-enhancing superfood. Others have proclaimed it to have a deliciously nutty flavour which is, and I quote from an article in the internationally renowned Hawick News, “not at all like sprouts”, and so I tucked in. They tasted just like sprouts. Not quite the same degree of bitterness admittedly, but otherwise the two would be quite indistinguishable. Which means I would rather bang my head on a spike, repeatedly, than eat these again.

Cracking on, roe deer, hazelnut pesto and rocket was a nicely composed dish (I wanted to ask if they also keep the deer in the garden, but I felt a sharp pain in my left shin and decided against it), with a rather small slab of venison, a touch fibrous under the knife perhaps, but not too tough, and it was sensitively cooked, all pink and pretty. On the whole I enjoyed this, and I wished I could have had more venison, and less of the preceding dishes. Especially the flower sprouts. I washed it down with a glass of sweetly oaky 2010 Bordeaux, from a château I have never heard of, and of which I have already forgotten the name. I think I have blanked it out, an amnesic response to the distress at not being able to order a glass of the 2013 L’Hurluberlu from Sébastien David, listed by the bottle, but not available by the glass, a wine which perhaps would have been more in tune with the ethos of the evening. And I like Sébastien, and I enjoy drinking wines made by people I like. Oh well. Next up was a very refreshing plate of Alexander ricotta, poached rhubarb and rhubarb sorbet. The poached rhubarb was certainly good enough, while the rhubarb sorbet was an absolute delight, vibrant pink, packed not only with flavour but also that delicious, mouth-watering acidity that rhubarb does so well. The look of the ricotta, meanwhile, took me back to my days as a younger man when, as a father to three young babies, everything I owned had at least some baby vomit on it somewhere. But let’s not focus on that failing because the rhubarb sorbet was so delicious I could at this moment have forgiven everything. Happily, the next platter, a very convincing cheshire from Appleby’s with heather honey and homemade crackers, was just as charming as the sorbet.

Finishing up, course number seven – well, it could be number seven, but I confess I had trouble keeping count – was hazelnut, gingerbread, smoked pumpkin agnolotti and hay ice cream. I have the feeling, judging by the gentle and very specific enquiries from the staff, that this was something of an experimental dish. It didn’t work for me, for three reasons. The agnolotti was stuffed with a pumpkin that had been heavily smoked, and although there was absolutely nothing fishy about it at all I found it impossible to dissociate the smoky flavour on the palate from the memory of the smoked fish eaten just an hour or two earlier; basically, when I tasted smoke, I got fish. Secondly, there was no sweetness to the dish at all, and I think it really would have given it a lift. And thirdly the hay ice cream tasted of, well, nothing. Full marks for experimentation. I hope suitable lessons were learned.

Although from time to time friends and well-meaning colleagues give me recommendations, it has to be said that I have received more unsolicited advice urgently imploring me to visit The Gardener’s Cottage than any other restaurant in Edinburgh. The philosophy here has clearly struck a chord with many, and business seems to be booming for Mailley and Murray. We were certainly crammed in on the night, our table secured by a reservation made many weeks before. Ultimately, however, I went out into the dark of the Edinburgh night fairly bemused by all the fuss. There is a ‘value’ side to it I suppose, as this is not an expensive dining experience, and there is also philosophical merit in their use of seasonal and locally-grown produce. And there is novelty too, in the communal dining; the last time I sat at such a bench to eat it was in a cafe full of workmen in Rochefort-sur-Loire, the listless lunchtime air filled with the heady scent of Gauloises and the intoxicating buzz of flies. My evening at The Gardener’s Cottage was, at least, a better experience than that. But I could still do without the flower sprouts.

Prices: For the seven courses, £35. For the lunch/brunch menu expect to pay £5 for roast cauliflower soup, up to £17 for hake, clams and mussels with cider and bacon. The wine list is reasonably priced, my glass of sweet oakiness was £7.50. (25/4/15)