More than twenty years ago, when I first set foot in Sancerre, I gravitated towards the Place Nouvelle Place, at the heart of the town. Back then it was the little bar at the south end of the square that drew me in, the endless supply of cold beer on a hot summer afternoon an irresistible attraction. Walking through the place a few months ago, however, my eye was drawn instead to La Tour, a restaurant at the opposite end of the square. I didn’t notice it on that first visit more than two decades ago. That might well be because it didn’t exist at that time, but then again I might simply have overlooked it. I might also have overlooked a rhinoceros rampaging through the town centre, such was my focus on getting my afternoon beers in.

In truth it is difficult to miss La Tour. The entire front wall of the restaurant folds back, allowing diners an unobstructed view across the lower half of the square. Immediately I sensed it was a tourist magnet. Was that an American accent I heard wafting over the cool night air? Something a little Teutonic too? And perhaps a smattering of Geordie English? Only slightly perturbed, I investigated. The menu looked interesting, and the wine list seemed nothing short of encyclopedic, at least when it came to the world of Sancerre, and what more would you want when dining in the town itself? A few minutes later I walked away, but not before making a reservation for Friday evening.

True to form, two evenings later the front wall was open, and I was enjoying a view across the square. Admittedly, in the early evening the view was dominated by parked cars, and a local guy swinging himself around a lamp post more times than I thought was conceivable. If he wasn’t stoned when he started, then he probably felt like he was when he finished. But as the sky grew dim, the streetlights came on, and the chimneys atop the roofs began to glow an illuminated blue; the square was once more a joy to behold. 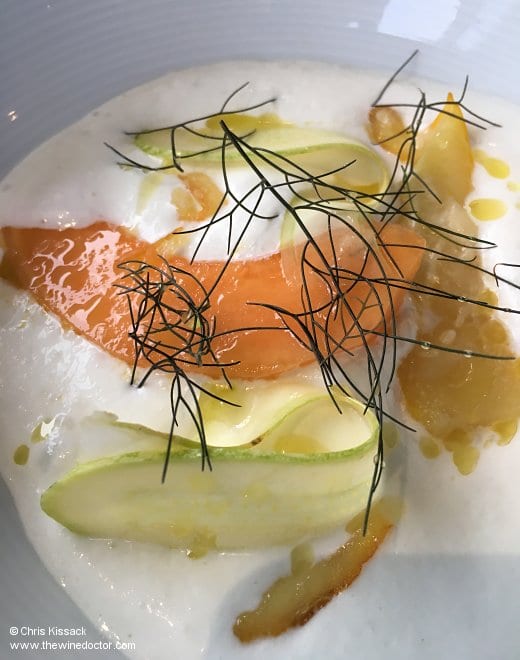 The food was also a joy to behold, and to taste. Betteraves, citron et verveine was a curious but ultimately enticing combination of summer vegetables, mainly wafer-thin slices of courgette more than beets, with melon, in a rich and velety foam hiding pieces of preserved lemon and verbena, and this was followed by a second surprise starter themed around caramelised onion, which took things up a gear in terms of cooking, and in terms of flavour complexity, moving from purity and freshness to more texture and grilled flavour here. These were both lovely dishes, and the main courses maintained the same high level of quality. Magret, courgettes, stilton et olives saw some perfectly pink duck hit the plate, while the poisson du jour turned out to be sea bass, the flesh moist, soft and flaking easily, the skin perfectly cooked, grilled to a crisp. After there came a belt-busting cheese course, featuring a huge range of goat’s cheeses (of course) but also other selections from all over France, as well as a huge slice of stilton to which, I found, resistance was futile. I washed them all down with the final glass of my 2012 Les Angelots from Pascal Reverdy; this is a great wine, although I think this top cuvée from a great vintage was perhaps broached a little too young. On reflection, I should perhaps have chosen a more mature example, or a less exalted 2012 that would have been a touch more approachable. Our repas finished – as any good meal should – with two fabulous desserts, chocolate, mousse à la vanille, sorbet cerise and autour de l’abricot et pistache, the former featuring a softly melting chocolate sponge and cherry sorbet, the latter a selection of apricot cake and sorbets, both being delicious.

We left contented, as did I think our fellow diners, as well as the lamp post-circling local. This is a great venue, serving charming food and boasting a fabulous wine list, with friendly service in whatever language you fancy (including American and Geordie). It all makes for a winning combination. Next I find myself in the Place Nouvelle Place, it won’t be that little bar at the top end I head to first.

Prices: The five-course set menu I enjoyed was a bargain €44, with a fish course instead of the second surprise starter it would have been €60. A tasting menu was €75, with wines €110, and there are a few à la carte options too. The wine list ranges from bargains up to the rarefied heights of Didier Dagueneau and the like; our 2012 Les Angelots cost €34. Total for dinner for two was €135.50. (8/10/16)