Don’t go to Chinon on a Monday, unless staring through the windows of locked-up shops is your favourite pastime. At last I have the answer for Bob Geldof and The Boomtown Rats; your aversion to Mondays, Bob, probably stems from a deep-seated awareness that Chinon is closed on a Monday. Innocent visitors to the town will find themselves wandering near-deserted streets, akin to a French version of your favourite post-apocalyptic novel. Le Jour des Triffids, perhaps?

It would appear, however, that (at least some of) the town’s cafés, bars and restaurants are exempt from this closure rule. Before arriving at La Cave Voltaire, I found myself gravitating to A La Pause Rabelaisienne, a café on the corner of the square at the end of the Place du Général de Gaulle. Mainly because it was open. As the hour hand struck pain-au-chocolat-‘o’-clock I took a seat and ordered a coffee.

“Avez-vous quelque chose à manger”, I asked in my most Rabelaisienne French.

“Non”, was his peremptory reply.

Happily, having downed and paid for my coffee, I wandered a hundred yards further up the street and came to La Cave Voltaire, where the host was considerably more informative. Proprietor Patrice Claire left behind his sommelier’s world to open what is half wine shop, half wine bar, his vinous focus being the organic and the biodynamic scene in Touraine, with petite restauration on the side. The menu consists of, in its entirety, charcuterie (small or large plate) or cheese (small or large plate). The focus is definitely on the wine here, but that isn’t to say the food should be ignored. 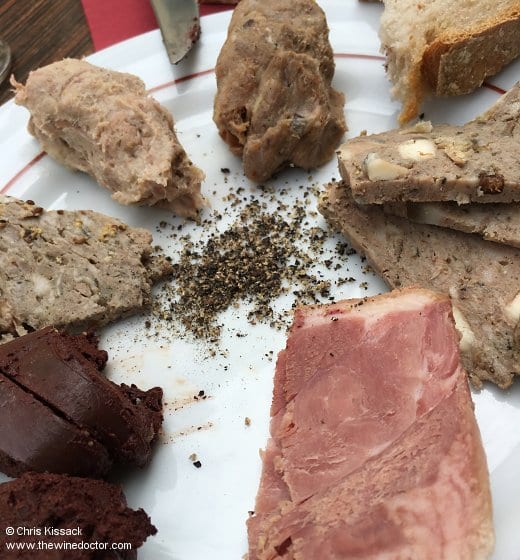 Patrice is trilingual, which doesn’t mean he has three tongues but in fact refers to his ability to speak French, English and German (so actually, maybe he does have three ‘tongues’ then?). He claims to do two of them badly, but the German he spoke to the tourists seated on my right seemed to go down well, and I have no doubt his English is better than my French. Having said that, keen to help further develop Patrice’s linguistic skills, I decided to keep him on his toes by exposing him to a fourth language, my own version of mangled pidgin-Franglais, which I adhered to religiously throughout the whole wine-and-dine experience. I have to say, he rose to the task without difficulty.

There is no wine list here; you tell Patrice what you are in the mood for, and he brings out two or three wines that he thinks might suit (and which he happens to have open I guess). From a selection of whites offered I passed on a wine from Château de Coulaine and went for a 2012 Chinon Blanc Les Chesnaies from Pascal Lambert, which was a pretty good choice. I also had a little taste of a 5.5% La Loirette from the Brasserie de la Pigeonelle, a blonde style beer which was delicious. As was the charcuterie (pictured above) when it arrived shortly afterwards, the boudin noir cooked in Chinon being my favourite, but it was hard to fault anything on the plate, which featured two rillettes, two other terrines and some sliced ham. Having polished that off then came the cheeses, again a very good selection. Naturally goat’s cheese featured strongly, and alongside easily recognisable styles such as Crottin de Chavignol and Sainte Maure de Touraine, there were others even Patrice couldn’t name, including an impressively salty blue goat’s cheese which I adored. Looking beyond the Loire Valley, the Comte was tip-top, and the Reblochon impressed as well. Patrice knows where to buy good cheese, I think.

This is a great venue, and I know when I am next in Chinon I am bound to return. Seated in the street outside the shop afford a good view of the clock-tower of the Château de Chinon on the hill above, although the ornate stonework on the building opposite also fascinated me. Inside, the shop is a cornucopia of delights, and I took a bottle of François Plouzeau’s 2015 Gamay Tra-La-La away with me to drink later. La Cave Voltaire, based on this experience, is a must-stop venue for a bite to eat or drink in Chinon. It is open seven days a week during the summer season. Just watch out for man-eating plants if visiting on a Monday.

Prices: The bill for two very filling platters of charcuterie and cheese, with bread, one glass of wine and one beer, came to €46. (6/8/16)