When it comes to the white wines of the Loire Valley, three varieties battle it out for supremacy. Between you and me, I personally think Chenin Blanc, ensconced in in the Loire heartland of Anjou and Touraine, reigns supreme; from here it gives us majestic Savennières to make any Bourgogne Blanc blush, and Vouvray which will age for a century, putting every other white wine made in France to shame. Nevertheless, it is not without competition, from Melon de Bourgogne to the west, and Sauvignon Blanc to the east. Both have their place; they are each of great commercial significance, and some of the wines made with these varieties, from the likes of Domaine de la Pépière or Gérard Boulay, are truly stunning.

With the reds, however, one variety stands out above all others. Cabernet Franc rules a dominion which overlaps that of Chenin Blanc, in Anjou and Touraine (there is a little in the Nantais, but not much), but it does not have the same competition. No red variety rules in the Nantais (there is just as much Gamay, Merlot or even Cabernet Sauvignon as there is Cabernet Franc), while to the east Pinot Noir is dominant; this variety fascinates me, and to my mind has superb potential, but it remains a niche interest, plantings lagging far behind those of Sauvignon Blanc.

So Cabernet Franc rules, and no wonder; the wines can be striking, perfumed with violets and dark summer or forest fruits when young, with notes of pencil shavings and more autumnal, sous bois and tobacco-like character when mature. It is the grape behind some of the region’s most famous appellations, including Chinon and Saumur-Champigny, and also arguably the Loire Valley’s most famous domaine, Clos Rougeard. Here, in this instalment of my guide, I take a close look at the variety, its genetics, its origins and its wines, including what is (for me) the thorny issue of methoxypyrazines.

Any study of the genetics of Cabernet Franc is bound to have most wine drinkers looking downwards, at this variety’s progeny, rather than upwards towards its ancestors. This is because Cabernet Franc is a parent to the two most important varieties planted in Bordeaux (and some other less vital varieties as well). First, in a chance crossing with Sauvignon Blanc, it gave rise to Cabernet Sauvignon, a variety that not only rules Bordeaux (although this depends on your point of view and personal preference for the left or right bank I guess) but which has also been planted in California, Australia, South Africa, South America and just about any other viticulturally-minded region or nation you care to name. Second, Cabernet Franc is also one of the parents of Merlot. Although for many years the identity of the other parent was a mystery, it was eventually found growing wild on a hillside in Brittany, and subsequently christened Magdeleine Noire des Charentes. In addition, Cabernet Franc is also an ancestor of Carmenère, now perhaps best associated with Chile, but also long-recognised as a Bordeaux variety. It is largely ignored in the region today, although some domaines do still work with it. In any case, with or without Carmenère, Cabernet Franc’s historical and genetic importance to Bordeaux can not be overstated. 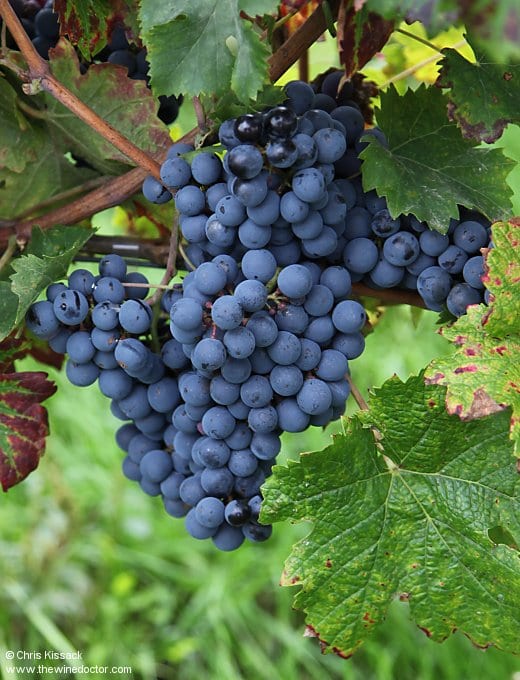 So its progeny seems well-established, but what of Cabernet Franc’s ancestors? Is it, as the identities of some of its descendents surely suggest, a Bordeaux variety that must have subsequently spread to the Loire Valley, or was the journey undertaken in the opposite direction? Or perhaps there is some different tale to tell? Unfortunately, the evidence we have to hand in order to help us write this story is rather patchy. Our knowledge of its genetics is sparse, but it is not zero; nevertheless I feel we should also take account of what history and Europe’s wine literature says of Cabernet Franc when trying to determine its origins.