Standing on the riverbank at Bréhémont as dusk fell provided a timely reminder of the raw beauty of the Loire. Grander than any great château or cathedral, the river wends its way through the landscape in majestic near-silence. I find it impossible to resist its enchanting spell, especially at this time of night; as I gazed out across the shadows, memories of sitting on the embankment at Chinon, in the shadow of Rabelais, flitted momentarily back to mind. That had been my first-ever visit to the region; it now feels like it was a century ago (well, it was last century). It was a journey of joy and discovery. 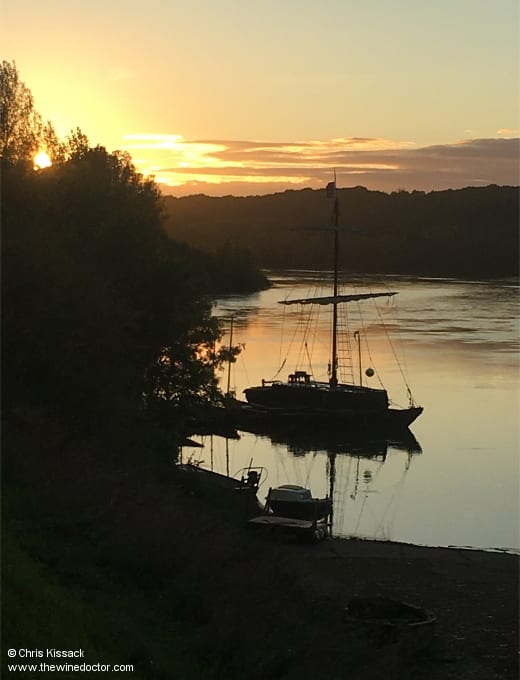 It was a small bat that broke the spell, its flittering annular flight drawing me back into the moment. I was here in Bréhémont to enjoy the river, but not merely its views and vistas; I was here to check out this week’s catch at La Cabane à Matelot.

The cabane in question is a riverside house, more suburban residence than cabin, and it is home to Romain Gadais, otherwise known as le pêcheur ligérienne. His route to running one of the most innovative restaurants in the Loire Valley was not a straightforward one. Romain started out in academia, gaining qualifications in watercourse management and environmental engineering, before going on to research fish behaviour in the Loire with INRA, tagging salmon, lamprey and other species with radio transmitters to track their movements and migrations. But with the passing of time Romain sensed he needed to work differently with the river.

Romain’s philosophy is based around building value in the many fish of the Loire the locals don’t traditionally consume. The three ‘noble’ fish of the Loire are zander (sandre), pike (brochet) and eel (anguille). Highly desirable, they are also very rare, constituting just 2% of the fish in the river. The other 98%, in Romain’s words the ‘abandoned’ species, are largely ignored; these include roach (gardon), barbel (barbeau), chub (chevenne), bream (brème), asp (aspe), catfish (silure) and other forgotten fish. Romain began fishing these species, building value into them by smoking them, or transforming them into rillettes which he sold at market. In 2016 he teamed up with a young chef who had come to work a stage with him, and in moving from the market stall to the restaurant La Cabane à Matelot was born. For more detail on his transformation from academic to guardian of the Loire’s native fish Romain explains all in this TED talk he delivered (in French) in Tours in early 2020. 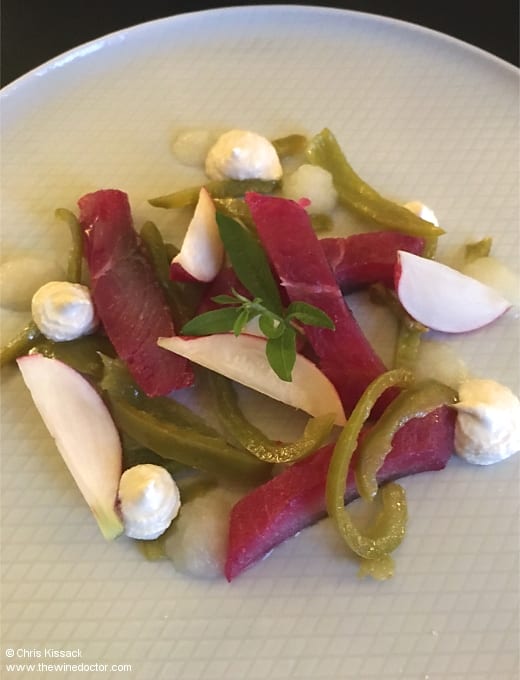 The menu at La Cabane à Matelot is short and seasonal; changing weekly according to his most recent catch, as an ‘aperitif’ Romain offers La planche des Pêcheries, a platter of smoked fish and rillettes, a nod to the products he made when he first started out. Then comes two options for the starter, and two for the main course. I kicked off with mulet en gravelax, crème de raifort, d’oignon vinagres, poivrons confit et radis croquant. This exceeded my expectations, the ingots of red mullet lightly smoked, lightly dried, texturally perfect, and set off so well by the contrasting acid-pickle-crunch combination from the mini-onions, horseradish cream and radish. Ordering it felt like taking a step into the unknown (gravadlax mullet…..really?), but I could have eaten this all week and been happy.

The other starter was asp in a delightfully filigree tempura batter, a quick taste confirming this was fish as food for the soul, but then it was on with the main course, and of the two choices it had to be silure. The menu promised silure rôti au beurre, déclinaison autour de la carotte, jus de volaille au miso rouge, chips de patates douces and Romain delivered on all this. If the mullet came in ingots this was more of a multi-million dollar bullion haul, a steak of catfish, gleaming white but with perfectly golden crust, the flakes peeling away as it rested on the plate. With the delicate poultry jus (to my surprise it worked really well with the catfish) and mix of crispy and soft root vegetables this was filling and, for such a fish, it was a delight. The other choice from the main course was écrevisse, in other words crayfish, although this was less convincing than the catfish. Served in a risotto of autumn courgettes, crunchy peas, fennel and celery, any crayfish included here was lost among all the other flavours and slightly eggy-creamy risotto.

The wine list at La Cabane à Matelot is a nod in three directions; first, to Romain’s father and brother, Christophe and Pierre-Henri Gadais, at Domaine Gadais Père et Fils and Domaine de la Combe in Muscadet. Second, to his mother’s family; she was a Bourgeois by birth, so naturally a couple of Henri Bourgeois wines make an appearance. And third, to the locality; situated just ten minutes from Azay-le-Rideau, it was a good to see Nicolas Paget, Quentin Bourse and one or two other locals on the list. I plumped for the 2019 Zeste from Domaine de la Combe, a zero-added-sulphite cuvée of Melon de Bourgogne. When I tasted this back in February it seemed a little oxidised in character, another black mark in the natural wine book. This bottle, however, was at completely the opposite end of the spectrum; starting off clean and bright, and reassuringly fresh, over the next hour or two it deepened and broadened, showing the textural substance that Melon can (sometimes even to my surprise) achieve. It bore some resemblance to the 2014 Gaïa from Jérôme Bretaudeau – in other words it was delicious.

I couldn’t resist finishing up with pudding, especially when I spotted the eel ice cream on the menu. Obviously this is a joke, not even Romain would try that (although I did eat egg and bacon ice cream in a Liverpool restaurant a few decades ago – it was certainly ‘interesting’). The two options for the final course are goat’s cheese or pomme clochard, a baked apple with ginger purée, crunchy hazelnut, and cardamom biscuit. I went with the apple, and it was a delightful combination, proving that Romain and his team know their pommes as well as their poissons. It is the latter that you come here for though, and I can’t wait until I return. (27/11/20)