Someone gives you a flyer for a new wine bar in the centre of Chinon and your interest is piqued. So what do you do with the flyer? The obvious action is to fold it up and pop it in your pocket, because it might just come in handy. After all, it does have the address on it.

Alternatively, you could do what I did, which was to leave it lying on a table in my rented accommodation. So when it came to finding La Cabane à Vin, I realised after ten minutes of wandering about the general vicinity of the Place du Général de Gaulle (“I’m sure it said it was around here somewhere”) in Chinon, the only way I was going to track down this wine-shop-come-wine-bar was to text one of my teenage offspring and ask them to send me the address. This, of course, is not as easy as it sounds. First, if it is not yet past two o’clock in the afternoon, the chances are they are still in bed, snoring away the best part of the day. Second, even if a response is received, this will inevitably come with some resentment at the loss in potential Pokémon Go playing time. That could be seen as a positive result, of course. The text message was sent. 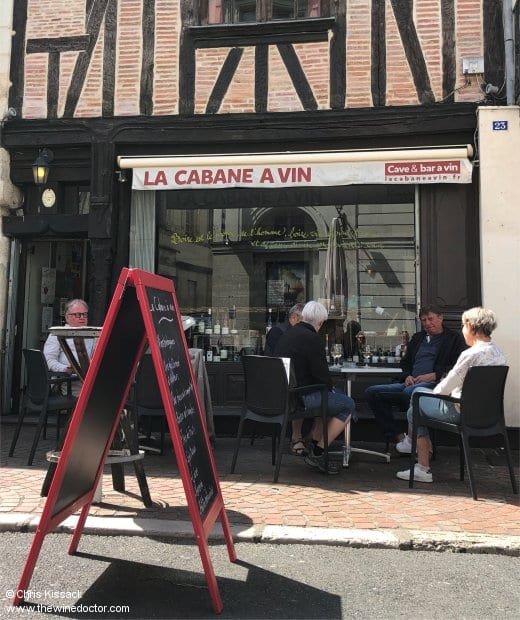 About three minutes later I found myself sitting at a table on the pavement outside La Cabane à Vin, number 23 on the place. As it happens, number 23 is actually up a small side street, next to the Brasserie de l’Hôtel de Ville (which does a mean entrecôte frites, by the way), which explains why I didn’t find it straight away. No sooner had I pulled up a pew than who should appear other than Matthieu Baudry. Of course I shouldn’t have been surprised; he has a financial stake in the business, and it had in fact been Matthieu who had given me the flyer a few days before. La Cabane à Vin is run by Emilie Riopel, originally from Quebec in Canada, who landed in France, met a vigneron – none other than Yves Plaisantin of Domaine Jaulin-Plaisantin – and got married. The idea for a wine bar was born, and in came their investor, Matthieu.

Rather like La Cave Voltaire (in fact I came straight from one to the other) this is a bar that majors on wine, with the petite restauration playing only a minor role. And the choices – charcuterie or cheese – are very similar. Having just gorged at the feet of Patrice Claire I couldn’t face another plate of boudin noir (I never thought I would find myself writing that) and I opted instead for a glass of something to enjoy in the afternoon sunshine. The selection of wines features Chinon quite strongly (as perhaps it should) with a leaning towards the organic, with bottles from Domaine Jaulin-Plaisantin and Bernard Baudry (naturally), as well as Domaine de L’R, Domaine Grosbois, Fabrice Gasnier, Johann Spelty, Domaine Dozon and more, all in all a great selection. From further afield, I spotted Pithon-Paillé, Domaine de la Pépière, Château de Passavant and others. In the end I settled on a glass of the 2014 Clos de la Févrie from the hugely talented and still under-the-radar Vincent Caillé, which went down very well as the sun continued its journey directly overhead, across a cloudless sky.

Having spent a good part of the day lingering outside La Cave Voltaire, it was rewarding to find immediately a second venue worthy of whiling away an afternoon in Chinon. This is another must-visit spot in the town, and when I return here – as I surely will, and probably sooner than you think – I will make sure I check out the charcuterie and cheese with a glass of Chinon. And this time, it won’t matter that I have now thoroughly and convincingly lost that flyer.

Prices: I had two glasses of Muscadet, and also walked away with a bottle of Domaine Jaulin-Plaisantin Chinon Les Bourdes 2011, the total bill for which was €22. (27/8/16)