Tom Kitchin made his name working out of his eponymously named restaurant The Kitchin, in Leith, Edinburgh’s port. From there he has established a miniature epicurean empire, branching out to create The Scran & Scallie and Southside Scran, as well as fostering new talent in city’s dining scene, not least Dominic Jack at Castle Terrace.

And yet it seems he is not content to stop there. His latest venture is The Bonnie Badger, a newly refurbished upmarket pub with rooms in Gullane, in East Lothian, well east of Edinburgh. Previously known as The Golf Inn, I think this is a smart move by Tom; Gullane is a golfing hotspot (as the old name of this inn suggests) visited by wealthy putters from the world over which is, apart from the rightfully popular La Potinière, woefully short of fine dining options. Those lucky enough to secure a table, however, still face being stranded in the middle of the East Lothian countryside, at the end of a long Chablis- and Chinon-fuelled dinner, by which time getting behind the wheel is clearly off-limits. The solution, from Tom and his wife Michaela, comes in the shape of 14 freshly refurbished bedrooms.

Dinner in this very spacious, airy and tastefully redecorated dining room follows the from nature to plate ethos that Tom has followed at his other venues. In view of the venue, and the pre-opening publicity material, I was expecting high-quality gastropub-style food. Tom – or rather Tom’s team – still had one or two tricks up their sleeves though.

I kicked off with scallops, cauliflower and raisins (pictured below) from the specials menu, which turned out to be a very wise choice. The scallops came lightly (by which I mean perfectly) seared, and nestled in a bed of puréed cauliflower. Dressed with golden raisins, which shimmered like jewels, Lilliputian florets of cauliflower and apple matchsticks, this was a divine dish which left me gasping for more. And it also left me a little confused; I came here expecting gastropub food, and found myself eating something that seemed altogether more refined. I would not have turned my nose up at this had I been eating at The Kitchin, or indeed any of Edinburgh’s more exalted eateries. I also had a quick taste of an alternative starter, dressed crab, avocado and toast, which seemed to tick all the boxes albeit with rather less flair. 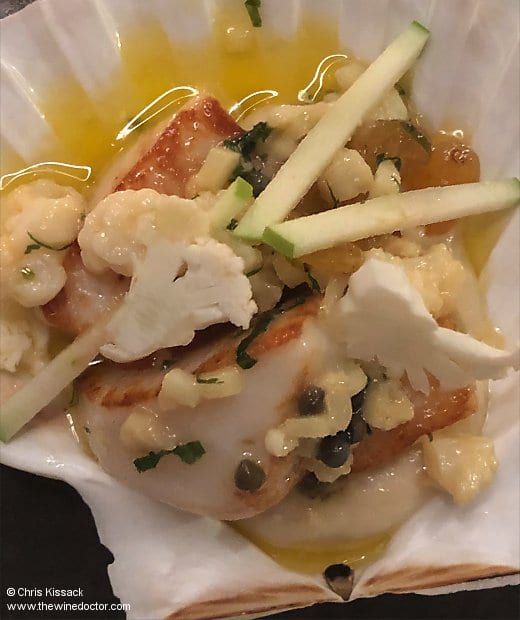 Having settled in for the evening it was a surprise to have my understanding of The Bonnie Badger turned upside down again when my main course arrived. Having been so thoroughly hooked by my starter (I was tempted to ask the kitchen if I could just have the same thing again for my main course, and then for pudding as well) I now had a sneaking suspicion that my main course, fish and chips, would be something special. Would it be curiously deconstructed fish and chips? Or some other equally ingenious play on the traditional Friday-night fish supper? All I could do was wait to see what the kitchen produced.

What arrived, in a return to a more gastropub feel, was in the end nothing more complicated than a well-presented plate of battered fish and chips. A beautifully cooked flaking white fish wrapped in batter, hot and crispy, and looking like it had been given a chamois-leather polish just as it had left the kitchen. The chips were crisp and bright, although the highlight of the dish was the chunky tartare sauce, essentially a pile of chopped gherkins, as broad as my little finger, sliced into discs and held loosely together by sauce. It all worked together very well (although, as always, I would have liked more tartare sauce). But I won’t pretend that swinging from a fine-dining starter (whatever fine dining means, but the scallops certainly brought the phrase to mind) to a fish-supper main course was a little confusing. A wagyu beefburger which appeared on the other side of the table was also pretty good. There was no doubt in my mind, however, that my choices were better matches with the 2017 Sancerre from Pierre Martin (listed as Yves Martin, but we all know Yves is Pierre’s father, don’t we?) that I eagerly pointed at when handed the wine list.

We finished up here with a cheesecake and a treacle tart, both pretty serviceable. But long into the night, and indeed for much of the following week, it was the memory of that scallop dish that persisted. Sufficiently so for me to return here I think. I just need to phone ahead and check it has reappeared on the specials list first.

Price: The dressed crab was £14.50, the scallops £15.50, both main courses were also £15.50 each, and the puddings were £8 each. The total bill, including a glass of tonic water, was exactly £80.50 for two. This seemed a little light (a bargain that would have me eating here every weekend) until I noticed the Sancerre, at £56 per bottle, had not been included. Once I pointed this out to the staff, and the bill had been amended, dinner for two came to £136.50. For more information on the rooms (I did not stay over so can’t make any comment on them), check out the link to the website above. (27/3/19)