Scotland’s west has a rich and complex coastline, dotted with islands large and small, and numerous lochs which cut deep inland, their shores lapping gently with a saltwater tide. One such loch, Loch Linnhe, which opens out onto the Atlantic behind the Isle of Mull, is home to the Isle of Eriska and its eponymous Hotel. Earlier this year, before anybody had even heard of coronavirus, I headed out there to check out the island, the hotel and of course its restaurant.

The Isle of Eriska is separated from the mainland by a narrow tidal channel, and access to the island is across a slightly rattly wooden bridge which lies at the end of a long single-carriageway road. Crossing that bridge took me not only to another land (a privately owned island, to be precise), but another time, one where the pace of life seemed slower, and where our connection with the land is perhaps a little closer. A weekend of peace, tranquility, good food and no doubt a glass or two of wine lay ahead.

After crossing the bridge the road sweeps around to Eriska House, a baronial manor built in 1884 by the Stewart family and which serves as the island’s centrepiece. It was purchased by the Buchanan-Smith family in 1973, who set about converting this large family home into a restaurant with rooms. It is the only building of note on the island, save for its outbuildings, a couple of small lodges on the eastern side, and some modern, cabin-and-spa-style holiday accommodation which are hidden from view on the bluff behind the manor house. Otherwise the island is a deserted wilderness, good for roaming and wildlife-watching. After my arrival I followed the signs down to Otter Point to do just that and was treated to the sight of fish jumping from the water as they fled from a hungry otter. Although in the end I realised it was not an otter chasing them, but a seal. A seal who, presumably, hadn’t read the signs. 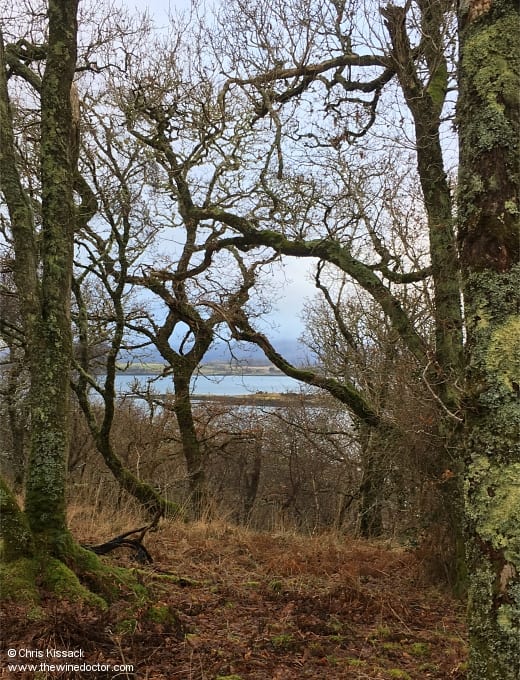 To work up an appetite I took a walk along the western and northern coast of the island, before heading back through the woods atop the bluff which shelters the hotel from easterly winds. Well, what else can one do when you have an entire private island at your disposal? It was extraordinarily peaceful, with some beautiful views through the trees across Loch Linnhe to the west, and then Loch Creran to the east. A couple of hours later, feeling suitably hungry, I returned to my room, coaxed a few smouldering logs in the fireplace back to life, and set about nursing a glass or two before dinner.

The restaurant is situated within the heart of Eriska House, and so my journey to dinner was a shorter (and much warmer) walk than my earlier wander around the island. At the time of my visit the kitchen was run by Graeme Cheevers, who came here in 2018 (he has since left to set up his own restaurant in Glasgow). Prior to his taking up this appointment he was head chef at Cameron House, the Martin Wishart restaurant on the shores of Loch Lomond, a position he had occupied since 2011. Before that he had worked in a number of other Scottish kitchens, including a stint at The Peat Inn, with Geoffrey Smeddle. 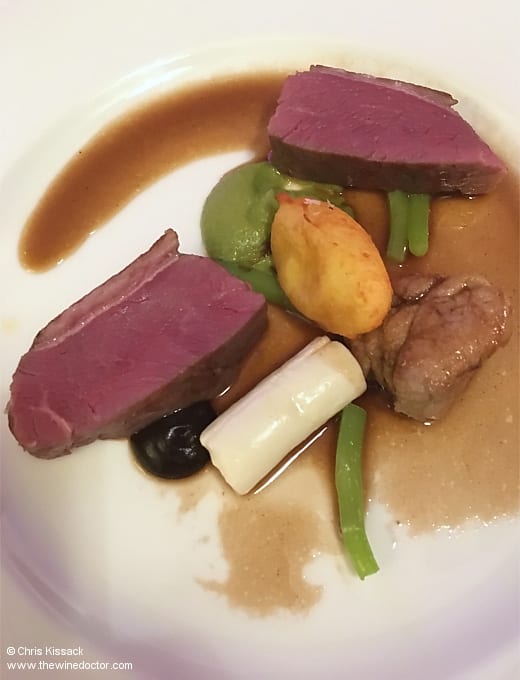 In truth I ate here two nights running (so that meant two brisk, wind-whipped walks were required), and so I had a good opportunity to check out the menu. The first night I kicked off with langoustines, from Kilbrannan Sound, with yellow corn and mushroom cappuccino, a combination I thought unusual and while there was no denying the quality of the shellfish, fresh, tender and gently cooked, for me the mushroom risotto did nothing to set it off. An alternative of foie gras mousse, with toasted brioche, mushroom, apple and pickled walnut, which I plumped for on my second night, was a rather safer and more mainstream combination which certainly felt more harmonious.

From the main courses, in contention for the highlight of the weekend was the saddle of borders roe deer, with baked celeriac, baby onions, sprouts and chervil roots, wish was delicious, although the rump cap of Black Angus beef and veal sweetbread (pictured above), with broccoli, bone marrow and black garlic, gave it a run for its money. In truth both dishes delivered in spades, the roe deer and beef both very well cooked (certainly with a sous vide character, to the beef at least) the sweetbread a great partner for the beef, and there were some interesting and intense flavours on both plates. 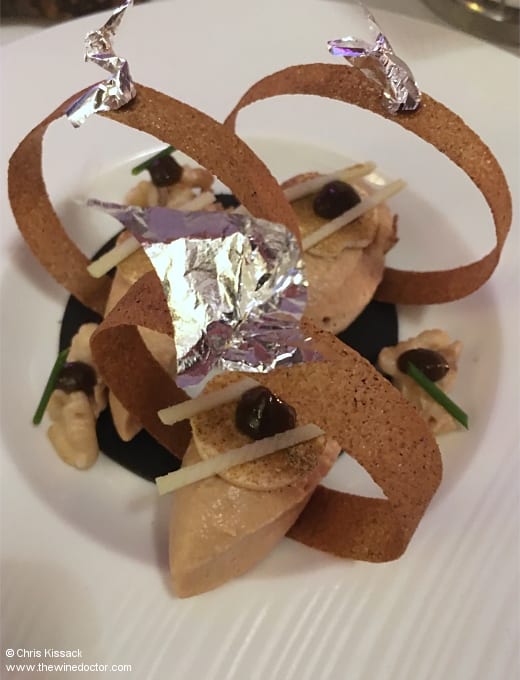 The desserts offered those with a sweet tooth some excellent choices, and a Michel Cluizel dark chocolate torte with preserved cherries and cherry yoghurt sorbet would I think keep any chocolate addict free of withdrawal symptoms for a few days. A salted caramel delice (pictured above), with Williams pears and star anise ice cream, would do the same for caramel addicts (surely they exist?) even if the presentation here, with its whisps of silver foil, seemed to be trying a little too hard.

As for the wine list, there are plenty of well-priced options, although my finger seemed to land mostly of young and oaky reds, the 2016 Château Tour des Gendres Bergerac La Gloire de Mon Père being a typical example. A very good wine, but I wished it had seen out another ten years in the hotel’s cellar before the cork had been pulled. Of course the list also provides other more ready-to-drink experiences, with some good nature choices from Burgundy or Bordeaux, but naturally these come at a price. 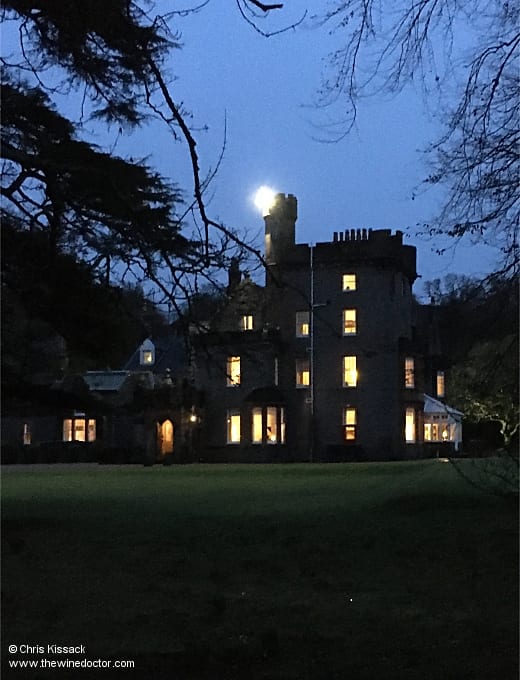 The Isle of Eriska hotel offers everything you could wish for from a country house weekend away. The rooms have all been refurbished in recent years, and I stayed in the very well-appointed Victorian Junior suite which comes complete with open log fire and huge four-poster bed. The staff are attentive and helpful, and although I wouldn’t say I left on first-name terms with everyone I did feel as though my weekend had been spent with a large and welcoming family as much as in a hotel. The facilities are good, with a spa and golf club also hidden away in a corner of the island. The lounges are all equipped with roaring fires (handy if you can’t be nursing the fire in your room to life) and are a great venue for afternoon tea, cream scones with a view over the grounds being another welcome weekend treat. Best of all, though, the island offers a peaceful and slow-paced retreat from modern life for a few days (don’t bother trying to find a mobile signal, although the hotel does have wi-fi throughout, obviously). I found the entire weekend wonderfully relaxing, and would gladly return.

Price: I paid my own way at the Isle of Eriska Hotel. A weekend package, with two nights accommodation in the Victorian Junior suite (less expensive rooms are available) with breakfast each day, as well as pre-dinner drinks and a three-course dinner for two people on each of the two nights, cost £778 (other less pricy packages are available). On top of this basic fee comes any extras, most notably any wine you drink with dinner, as well as afternoon tea or spa treatments. The walks, of course, come free. (11/12/20)