Aizle is situated in St Leonard’s street, in the shadow of the crags of Arthur’s Seat, the remains of a long extinct volcano that looms over this corner of Edinburgh. Aside from the fact this makes the view for diners sat by the window that little bit more interesting, this location places Aizle within striking distance of various university buildings, halls of residence and Edinburgh’s Old Town. Which explains why on the evening I visited the place was bursting at the seams, mostly with Festival-goers and acolytes of the Fringe, with the odd disorientated student thrown in for good measure.

The Aizle modus operandi is simple enough; the evening’s ingredients are marked up on the world’s largest blackboard behind the bar, and it’s up to you to speak up if anything doesn’t take your fancy. If you have a morbid fear of succotash, or if you are one of the few unfortunate people to have both (a) developed and (b) realised you have an allergy to katsuobushi, then it might be a good idea to speak up when invited to do so at the beginning of the evening. Otherwise dinner might not work out that well for you. And that would be a great shame, as my evening at Aizle was one of the most enjoyable dinners I have had in recent months, in Edinburgh at least (memories of the Auberge du Val de Vienne provide some stiff competition). 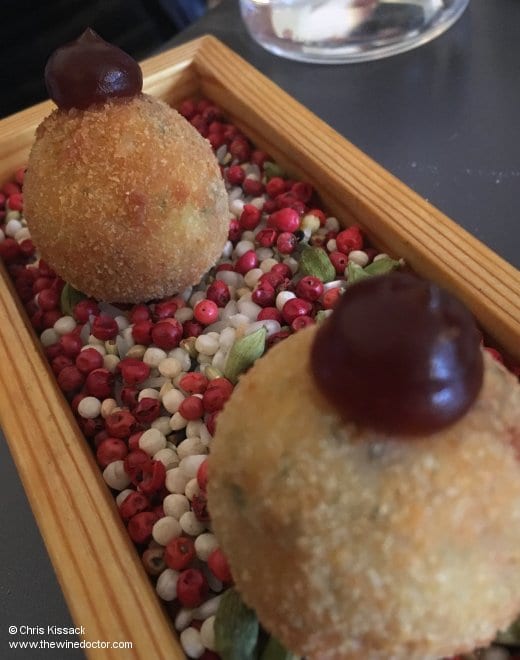 The set menu (the only menu) is five courses, although the first course came in a quick-fire succession of amuses bouches, or ‘snacks’ as they are called here. A tiny dish of scallop with apple and celeriac was a little too green and sharp for me, but I can’t deny it was fun, and a mouthful of kale with black garlic, onion and gomashio (which is, essentially, toasted sesame salt) displayed a sweet, gently roasted salted-onion-garlic flavour which was a charmer.

Sandwiched between these two, however, was something quite special, chicken rillette with egg yolk and umami (pictured above). Presented in a completely non-suggestive manner, this bite featured a warm, golden egg yolk, perfectly unset, captured within a crispy ball of rillette, while the ‘umami’ was a heavily reduced and thickened stock which sat atop it. I am, of course, a sucker for a well-done egg yolk, and whether it is chicken, duck, gull or pterodactyl, it is the skill in cooking it that makes the difference. And judging by this ‘snack’ in particular there is clearly some skill and attention to detail in the kitchen here. 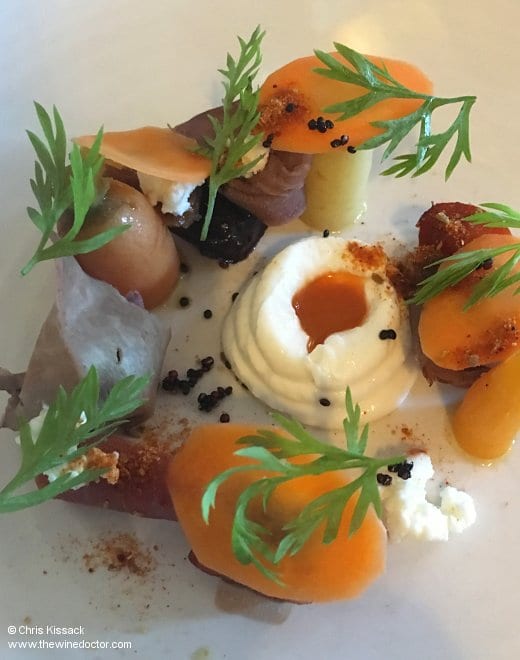 A dish of heirloom carrot with ox pastrami, fig and cheese curds (pictured above) was good enough, with miniature skyscrapers of correctly cooked carrot and some raw slivers for texture, although it didn’t really impress on the same level as that egg yolk. The sea bream with sweetcorn, succotash and katsuobushi was a huge step up though, and was stimulating both to the eyes and the palate; the eyes, as the flakes of katsuobushi danced and quivered as the waiter added a little light creamed fish broth; and the palate, because this was brilliantly, intensely flavoursome. Katsuobushi, dried, fermented and smoked skipjack tuna, was the real driver behind this truly intense flavour, and the paper-thin flakes which danced in the warm steam of the broth was all part of the appeal, while the succotash, a melange of beans and corn, added texture and substance to the dish. This was a superb dish, as was the Inverurie lamb with pea, lettuce and miso that followed it, the lamb flavoursome and sensitively cooked.

We finished up with Scottish blueberries with ricotta, sablé breton and lemon verbena which was certainly nothing to complain about. On reflection the standard of cooking across the whole evening was really strong here, with two or three genuine high points. Concept, season and sourcing of ingredients all matter when it comes to running a good restaurant, but ultimately what really counts the skill in the kitchen and what effect this has on the quality of what goes on the plate, and Aizle scores on this point as much as on all the others. This was a great dinner, and it was great value too. I shall definitely be heading back to Aizle before too long.

Price: The cost per head was £45 for five courses, with optional matched drinks adding an extra £35 on top of that. The wine list, while not particularly user friendly (difficult to read in parts as it is printed on heavy paper embossed with dark blue flowers, with no vintage information, a Hugh Johnson nightmare in fact) provides some good value options. I chose a 2015 Le Petiot Blanc from Vincent Ricard, probably the most interesting Loire option on the list, and a pretty good foil for most of the dishes, although perhaps not the lamb. This was £35. Dinner for two therefore came to £125. (9/9/17)