Railway arches were once exclusively the home of grimy MOT stations and motorcycle repair shops, but no more. These days any self-respecting row of arches hosts artisan bakers and brewers, hipster coffee shops and restaurants, and nestled in one such arco novo on London’s south bank is a little piece of Portugal, Bar Douro. Having recently called in here, en route for the Tate Modern just five minutes walk away, future thoughts of railway arches will be much less carburettor, more cataplana de marisco.

We took a seat at the marble-topped bar looking out onto Flat Iron Square; it was either this or a seat at the bar facing inwards (I guess the main clue to the seating arrangements is in the name). There is no doubt that we have left London for Lisbon here; the characteristic blue-and-white azulejo tiles are a bit of a giveaway, but dig deeper and there are other clues. The founder and proprietor is Max Graham; raised in the Douro, Max hails from the family that owned W. & J. Graham’s before selling to the Symington family in 1970 and going on to establish Churchill Graham. Max set up Bar Douro hot on the heels of several successful pop-up ventures in London, working with head chef Tiago Santos, previously of Casa de Chá da Boa Nova, a much-loved seaside restaurant in Porto. 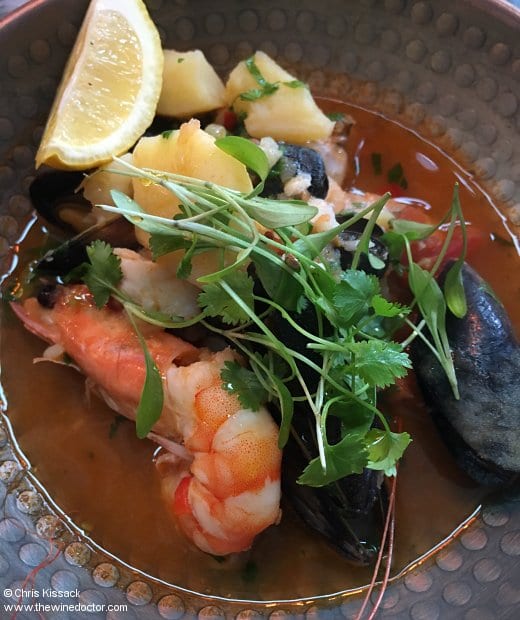 The kitchen was just warming up as we arrived, first through the door for Sunday lunch, but things soon got going, and by the time we left the staff were turning away hungry passers-by. The big hit for me was the cataplana, a seafood stew (pictured above) which was brimming with interest and rich, dish-licking flavour. The leitão was much less successful; a small hunk of roast suckling pig, it was stringy and still wobbling with unrendered fat, and it struck me that it really needed an hour or two more of gentle slow roasting. This left me scratching my head a little, as everybody I have since spoken to about Bar Douro ranks this dish as a highlight of the menu, so we were perhaps just unlucky. Working outside of my Loire Valley comfort zone, we equipped ourselves from the short-but-sweet by-the-glass list, picking out a green-apple blend of Alvarinho and Trajadura from Quinta de Maderne in the 2016 vintage, and a richer oaked 2016 Reserva white from Herdade do Esporão, both of which felt safe rather than exciting, but they did the job.

We opted to finish with pastel de nata (who in their right minds would do anything else?), a choice which prompted a visit from the chef not to congratulate us on our good sense, but to apologise as he had not yet started on his pastries. No worries, we will wait (and fight through thick jungle, and traverse stormy seas, and battle giant lizards, anything for pastel de nata). Twenty-five minutes later they appeared. They were worth the wait. Reluctantly deciding against a second round of custard tarts, we paid up and headed towards the Tate Modern, an afternoon of Picasso fuelled by pastel de nata ahead. It works for me.

Prices: Our main courses were £18 each, although the menu also features a good selection of small plates ranging from £3 up to £13, so there are certainly less pricy options for lunchtime dining. Cheese and charcuterie boards are £12 each, or £16 for a mixed board. One pastel de nata will set you back £4. There is a huge range of by-the-glass options from Portugal, starting at £4.50, and also an excellent 500ml carafe option for the same list. I was pleased to see a range of Churchill Ports as well, starting at £5 per 100ml glass. Our lunch, including two glasses of Filipa Pato 3B espumante, bread, two coffees and an optional 12.5% service charge came to £92.25. (25/8/18)