With street names such as the Rue des Caves and Rue du Plaisir, the little riverside commune of Sazilly seems to wear its vinous heritage on its sleeve. Little surprise, then, that during my recent trip to the region I should find myself here, checking out the harvest in the Clos de la Cure, a parcel belonging to Charles Joguet situated between the modern-day village and the Vieux Bourg, closer to the river. The vines sit almost directly behind the Auberge du Val de Vienne, and it seemed only right that I should call in for dinner afterwards. Well, it would be rude not too, wouldn’t it?

I think of all the restaurants within easy striking distance of my pied-à-terre south of Chinon this is the one I visit most frequently. One big draw is the wine list, which is naturally rich in the top wines of the ‘home’ appellation. There are a few listings from ‘foreign’ lands of course, such as those of Clos Rougeard (as noted in my previously published review), but since my last visit the prices seem to have caught up with reality, which means I shall eschew these particular bottles until I have secured the inevitable lottery win (which is now long overdue and surely imminent). 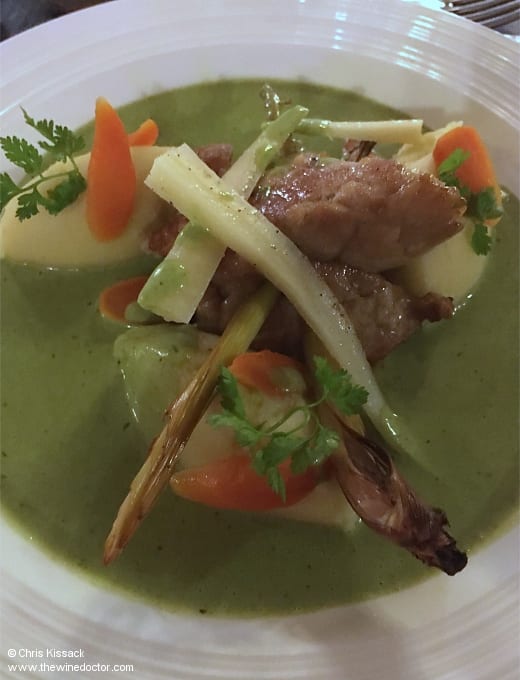 The menu at Auberge du Val de Vienne evolves slowly, if at all, and it is dominated by a half-dozen plats signatures. The trio of starters feature either foie gras or langoustines, and on this occasion I opted for the latter, the queues de langoustines rôties served with fresh mango and wild foraged herbs. It is a combination which works surprisingly well, the soft sweetness of the mango countered on one hand by the textured crunch of hazelnuts, and the bite of the herb salad, which largely consists of attractively bitter flat leaf parsley. All of which serves as a backdrop to the succulent langoustine tails. It’s delicious.

Suitably loaded up with langoustines, my main course featured sweetbreads, pomme de ris de veau en brochette de citronnelle et son beurre d’herbes. The lemongrass-skewered pomme was nestled within a bed of potato purée and root vegetables, all in a rich and generous serving of herby butter sauce. In terms of visual impact (pictured above) it ticked all the boxes, in terms of flavour it was, shall we say, understated, but perhaps my palate was still zinging from all the bitter herbs that accompanied my starter. It did work very well with the 2018 Chinon Blanc Chante le Vente from Domaine de la Noblaie though. This had started off big and broad-shouldered, but after an hour-or-so of air it had opened out and was singing with greater vibrancy and finesse. Jérôme Billard has been working to get more substance and texture into his entry-level white, working with more cloudy juice, aiming for a less clinically strict style, and the results are good. It does need time to get going though, even at this early stage (maybe this is true of other 2018s as well?).

I finished up with the baba au rhum et son crémeux de châtaigne, glace à la pistache, and this was a delight, not least because while the baba was served with its chestnut and pistachio supporters, the Martinique rum you add to your personal taste from a graciously provided 70 cl bottle. I finished my evening not with a baba au rhum, but with rhum avec baba. And why not? Martinique rum has the only appellation for rum that I know off, so it would be rude not to, wouldn’t it?

Prices: The set menus of old have disappeared, and dining here is now exclusively à la carte. The langoustines were €16, the sweetbreads a rather hefty €34, the rum baba €11. The 2018 Chinon Blanc Chante le Vente from Domaine de la Noblaie was €27. Throw in a bottle of mineral water and the bill here was €146.90 for two diners, each having three courses. (13/11/20)

I tried to shield myself from the baking sun as I set about tackling my long list of gardening jobs, but the huge parasol I had pressed into use had clearly seen better days. Several of the long wooden arms demonstrated a penchant for collapsing without a moment’s notice, usually directly onto the top of my thankfully very bony head. By the time I had finished my day of weeding, hoeing and watering I was feeling decidedly off colour, but I couldn’t be sure whether it was sunstroke, or concussion. Fortunately I soon discovered that the treatment for both appears to be the same; an evening out at Auberge du Val de Vienne provided some much needed ‘medicine’.

Situated in Sazilly, on the main road that runs parallel to the course of the Vienne, the Auberge du Val de Vienne is home to Jean-Marie Gervais and his wife Florence. Having cut his teeth in the kitchens of Blois and Tours, Jean-Marie opened the Auberge in 1992, and 25 years later the restaurant is still going strong, so I figured he must be doing something right. Seated at a table near the entrance to the kitchen, I soon found out for myself what that was.

After a deliciously refreshing amuse bouche of gazpacho with croutons I got stuck into a starter of escalope de foie gras chaud posée sur une salade de haricots verts ‘de jardin’ with vinaigrette à la truffe which did exactly what it said on the tin, provided you can read French tins that is. The focus was of course the slice of foie gras, which was perfectly à point, the contrast of the richly seared exterior against the warm and melting core a delight. The green beans served as a perfectly uncomplicated scrim, while the truffle vinaigrette added to the dish, without stealing any of the limelight. I also had a taste of one of the other options that appealed, the grosses langoustines poêlées à la mangue fraîche et aux herbes folles, the mini-lobsters most beautifully textured. I forgot to ask if they might have followed me down here from the cool coastal waters of Scotland. 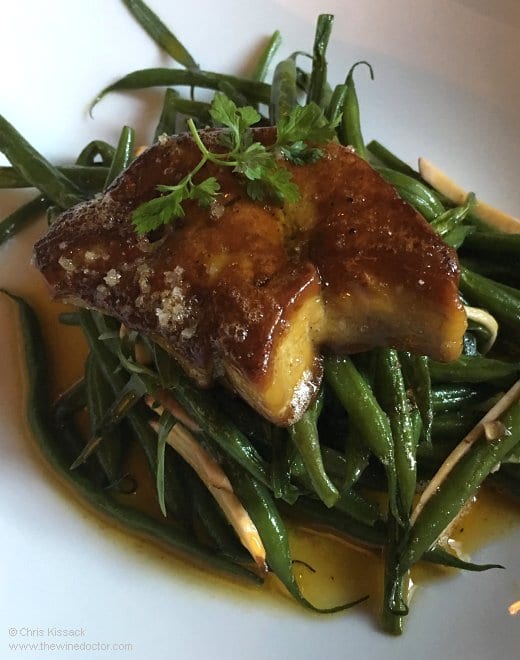 Now fully recovered from my syndrome of sunstroke and concussion I was soon tucking into the filet de buf ‘race Limousine’ La Ferme de Villiers sauce au poivre vert which was no less remarkable than the foie gras, the steak saignant and tender, and showing a wonderful and almost gamey richness of flavour beautifully offset by the green peppercorn sauce. This was delicious, as was the carré d’agneau rôti en croute de thym with jus corsé à l’ail, perfectly cooked lamb lollipops dressed with thyme and garlic. And both dishes were nicely complemented by the 2008 Le Bourg from Clos Rougeard. In truth I thought in ordering this I was perhaps being a little flash, until the couple on the table next to me also ordered the a bottle of the 2011 Le Bourg, as well as a bottle of the 2009 Les Poyeux, which they tackled having first downed a bottle of Vouvray with their amuse bouche. I am clearly an amateur.

We devoured our desserts, sablé Plougastel, chantilly à la vanille et fraises de région, sorbet fraises on one side of the table, essentially shortbread with fresh strawberries, strawberry sorbet and chantilly cream (what could go wrong?) and moelleux au chocolat noir, coeur Amarena et sorbet cacao, chocolate fondant and mousse, with chocolate sorbet (like I said, what could go wrong?) and I took a moment to reflect on what had been a simply glorious meal. On many occasions when dining out you overlook certain aspects of the evening, because it is important to be positive about the good things in restaurants, and not nitpick the niggles. But here, at Auberge du Val de Vienne, there simply wasn’t anything to pick at. This was one of the most fabulous meals I have eaten during all my visits to the Loire Valley. It even cures sunstroke. And concussion. I shall be back.

Prices: The set menus were priced at €57 for five courses (starter, fish, meat, cheese, dessert), €53 for four courses (cheese or dessert) and €41.90 for three course (starter, main, dessert) with a supplemental cheese course an option for €9.90. À la carte options are available, of course. As always in the Loire Valley, the wine list was brimming with well-priced options, featuring some of the best domaines in Chinon (naturally) but also further afield. The Clos Rougeard Saumur-Champigny Le Bourg 2008 was €115 for the bottle, but there were many cheaper options. (26/8/17)