So that’s the red ‘big five’ – Cabernet Franc, Gamay, Pinot Noir, Grolleau and Pineau d’Aunis – all done. As with the white varieties, however, there are many other less iconic varieties waiting to be discovered in the Loire Valley. Some are hardly insignificant though, and some have great yet still untapped potential. There are huge areas planted to Cabernet Sauvignon, and Côt has been touted as the Loire Valley’s ‘next big thing’. You could argue that each deserved a detailed examination of their own.

Nevertheless, with the exception of the occasional bottle of Cabernet d’Anjou, you aren’t going to encounter pure varietal wines made from either of these varieties unless you work hard to track them down, and both varieties have a ‘spiritual home’ outside the Loire Valley, whether it be Bordeaux or Cahors. For that reason I am going to deal with them here in a slightly briefer format.

Although this is perhaps the world’s best-known grape, one that is found growing somewhere in almost every viticulturally-minded nation on the planet, its role in the Loire Valley is a minor one. It perhaps first springs to mind in the context of famous appellations such as Chinon and Saumur-Champigny, both of which are predominantly Cabernet Franc but which also permit Cabernet Sauvignon as a secondary blending variety (in practice, most of the top wines are 100% Cabernet Franc). And of course there is also its role in the pink and fun-filled rosé Cabernet d’Anjou. Where Cabernet Sauvignon really comes into its own, however, is as a red wine, in the Anjou, Anjou-Villages and Anjou-Villages Brissac appellations. Here is where we find the iconic, individual, cellar-worthy wines we should expect from this variety.

It is I feel beyond the remit of this guide to the Loire Valley to explore fully all that is known about Cabernet Sauvignon, not least because its popularity means it has been very heavily researched and thus there would be a lot of ground to cover. Nevertheless I cannot continue without at least mentioning its origins, which have been determined with absolute certainty by genetic study. Every wine drinker should know that this variety is the result of a crossing that occurred in the wild, by chance, between Cabernet Franc and Sauvignon Blanc (the discovery of this parentage, by Carole Meredith of UC Davis, was similarly serendipitous). It seems most likely that this cross occurred in Bordeaux, and it was in Bordeaux that the variety was first recognised as being distinct from Cabernet Franc, when it was described by Antoine Feuilhade in Livre de Raison d’Antoine Feuilhade, an academic text he penned between 1763 and 1777. He called the variety he identified Petit Cabernet, but today it is widely accepted that it was Cabernet Sauvignon he was describing. 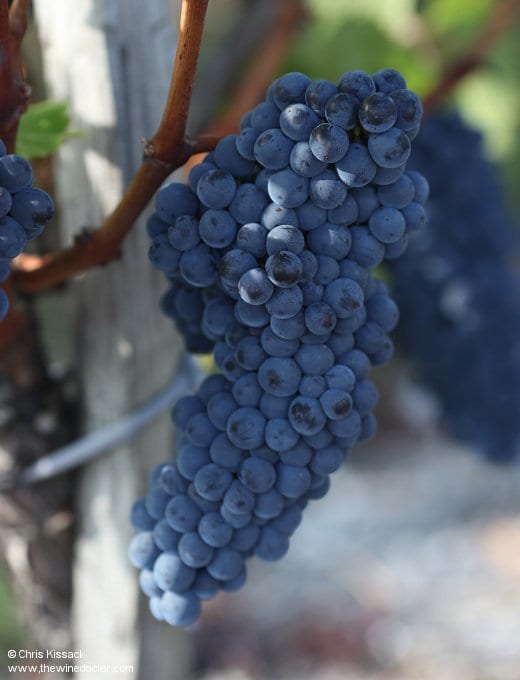 Although listed here as a minor Loire variety there are in fact more than 1,200 hectares planted in the region. Thus although it lags behind third-place Grolleau in the Loire league table, it is certainly ahead of other classic varieties including Pineau d’Aunis and almost certainly also Pinot Noir. As noted above it appears in a number of well-known appellations, and those who know the Loire Valley only vicariously will tout the Touraine and Saumur appellations as evidence of its relevance. The truth, however, is that Cabernet Sauvignon comes into its own in Anjou, which it parcels up in a turf-war with Cabernet Franc. To the east, where the terroir is all cool limestone, limestone similar to that which runs beneath Saumur, Vouvray, Sancerre, Chablis and parts of the Champagne region, the more amenable Cabernet Franc is king. But to the west, where warmer igneous soils proliferate, suddenly Cabernet Sauvignon comes into its own. Here, on slopes of dark schist which absorb the sun’s energy by day and release it back to the grapes later, warming them through the night, Cabernet Sauvignon can ripen perfectly.