The leaf-strewn back roads that twist and turn their way through the broad expanse of the Pessac-Léognan appellation hide many gems. Peer through the trees, or take a peek over occasional high stone wall, and there is every possibility you will spot some secluded and under-appreciated château and its vines. Château Le Thil, or to give it its Sunday name, Château Le Thil Comte Clary, is one such understated property. Hidden from view by surrounding woodland the château, an elegantly unfussy two-storey chartreuse, today operates as a high-class hotel, where guests can take a break away from prying eyes. The vineyards un up the slope behind it, the wine made in distant outbuildings. It is an estate of some size, and yet you could drive past it and, other than the cast-iron gates that provide some clue as to its existence, you would never know it was there.

It is the norm to describe Château Le Thil Comte Clary as a modern creation, partly true as the first modern reincarnation of the vineyard was only planted in 1990. It is not entirely true though, as indeed should be obvious from the date of construction of the château (pictured below), which was 1737. Before we come to the estate’s rebirth first with Jean de Laître and then with the Cathiards of nearby Château Smith-Haut-Lafitte, however, I first present a little (indeed, a very little) history.

Historical references to the domaine and its vineyards are hard to come by, nevertheless mention was made of the estate in the 1874 edition of Cocks et Féret. It was listed as one part of Domaines Le Thil et Le Désert, in the possession of Monsieur G. Duffour. This seems to have been a very parcellated domaine, scattered over a number of communes including Léognan, Villenave-d’Ornon, Cadaujac and Martillac, more a collection of parcels of land dotted here and there than an imposing estate. Even so, altogether it added up to 150 hectares, although very little of this was vineyard, most of it being pasture or woodland. There were only about 12 hectares of vines, producing about 25 tonneaux (equivalent to one hundred modern-day barrels) per annum. And most of these vines were at Domaine du Désert, in Villenave, not at Le Thil. 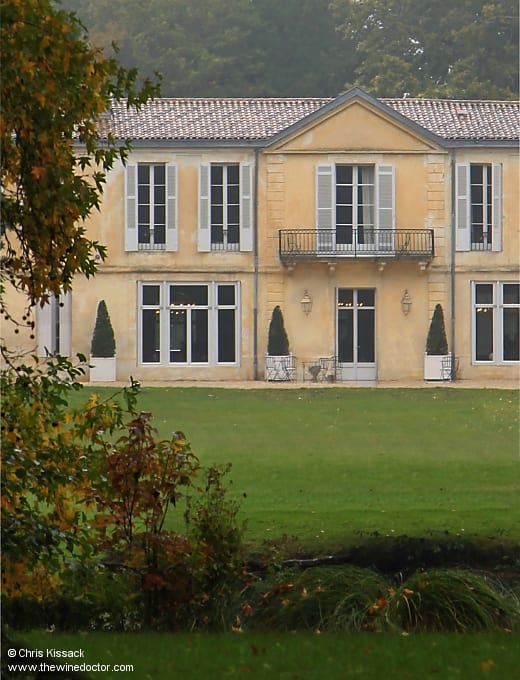 The Duffour family were well known in the region, most notably Lodi Duffour-Dubergier (1797 – 1860), who was mayor of Bordeaux as well as the sole signatory of the 1855 classification of the Médoc. The family also owned at one time Château Rayne-Vigneau in Sauternes, as well as nearby Château Smith-Haut-Lafitte. This joint ownership probably saw fruit from the Le Thil vineyard taken up the hill to the cellars at Château Smith-Haut-Lafitte, which would explain why older references to vines and wines at Le Thil are so difficult to come by. Indeed, in subsequent editions of Cocks et Féret, published in 1883 and 1886, one Raymond de Duffour was noted to have won a silver medal of merit at the Exposition de Bordeaux in 1882, for his wine made at Le Thil et Le Désert, but there is no other mention of Le Thil in the text, and it then disappeared from subsequent editions. As, I suspect, most of the vines subsequently disappeared from the slope behind the château.