I have a particularly fond memory of Château Larrivet-Haut-Brion. This memory does not stem from any particular bottle, although there are certainly some good wines being made here in modern times. Instead it comes from a visit I made here a few years ago, proof, to my mind at least, that the joy of wine comes not just from having a high-scoring liquid in the glass in front of you, but comes from visiting, tasting, feeling the soil, perhaps meeting the winemaker, and understanding. Château Larrivet-Haut-Brion was the first château I visited the first time I attended the Bordeaux primeurs. It was not my first visit to Bordeaux, far from it in fact, and I had called in on many grander châteaux, even the likes of Château Margaux, before I descended upon Château Larrivet-Haut-Brion. But this was the first time I was to have a chance to taste the new vintage at this early stage, and naturally I was excited. As I ascended the staircase towards the first-floor tasting room at Larrivet-Haut-Brion I can still recall hearing the hubbub of tasters within the room ahead. Turning a corner a roomful of swirling and spitting was revealed to me, and shortly thereafter the tasting, not just of Larrivet-Haut-Brion, but of almost all the top wines of Pessac-Léognan, began. I haven’t missed a primeurs week since.

Although now a very solid member of the Union des Grands Crus de Bordeaux, and a fairly significant estate within the Pessac-Léognan appellation, the evolution of Larrivet-Haut-Brion has not been without difficulties. Its past is somewhat chequered, and as is the case with a number of other châteaux in this part of Bordeaux viticulture here has faltered on at least one occasion. This profile deals with all such matters, beginning here with a brief history of the château. 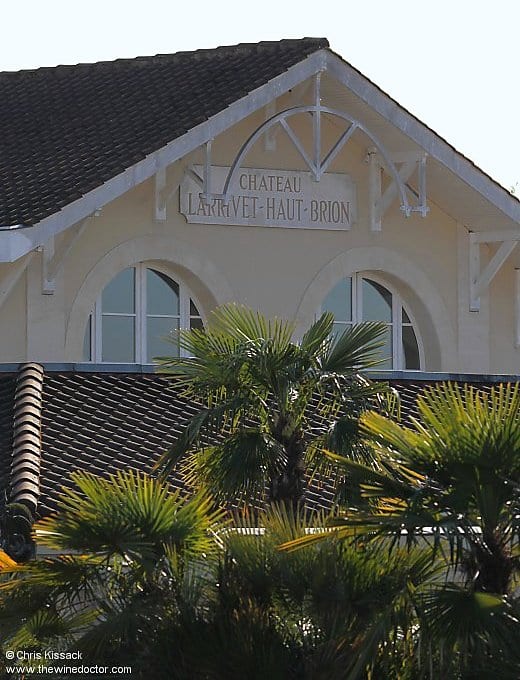 The origins of Château Larrivet-Haut-Brion lie in the estate of the Marquis de Canolle, a nobleman originally of English blood, his ancestors having stayed on in Bordeaux after the end of the Hundred Years’ War. The family owned what would one day be known as Larrivet-Haut-Brion as well as part of what is now Bélair-Monange in St Emilion, and they managed to maintain their hold on the former estate (although strangely the latter was seized as a bien national) during the Revolution in the late 18th century. Under the tenure of this family the property was known as La Rivette, from which the modern name is obviously derived. The addition of brion, plainly a common practice in the region, does not relate to a previous owner as might be suspected, nor any relationship with more famous neighbours such as Haut-Brion or La Mission Haut-Brion, but is a local term for gravel.