Although there are plenty of vineyards surrounding the little town of Martillac, very roughly south-east of Léognan, it is not blessed with a huge number of classed growth properties. There are certainly some notable names, including Château Haut Nouchet just to the south, and Domaine de la Solitude just a little way to the west, nevertheless as far as the Graves classification goes, Château Latour-Martillac is the town’s only contender. Perhaps that is why, despite the swathes of vineyards that run both to the north and the south of the town, interdigitating with the suburbs, this estate feels somehow isolated here, alone and lost. Perhaps the other reason is the estate’s seemingly secluded location; although only a hundred-or-so metres from the rather imposing 11th-century church at the centre of Martillac, which incidentally is dedicated to the virgin Visigoth Sainte Quitterie, the estate is hidden away up a narrow lane, flanked by hedges and trees. It is only at the end, as the road opens out, that the vineyard and solitary tower – the tour of Latour-Martillac – are revealed.

The estate seems to be ancient, as although the majority of the buildings here are modern there is one, the aforementioned tower, which is clearly very old. It is said to be the remains of a small fortress, long since demolished, which was built during the 12th century. Other parts of the fortress have vanished for ever, and writing in Grands Vins (University of California Press, 1995) Clive Coates asserts that the stone was re-used in order to build the existing modern-day Latour-Martillac château, although having visited the domaine I struggled find a building worthy of the name. Next-door, however, and overlooking the Latour-Martillac vineyard, is the very attractive Château de l’Hironde, which is of some age and graced with three turrets topped off with pointed, witch’s-hat roofs. Perhaps the stone was used for this building instead? Well, whatever happened to it, what remains of this fortress now stands in isolation, in the courtyard at the front of the Latour-Martillac estate. 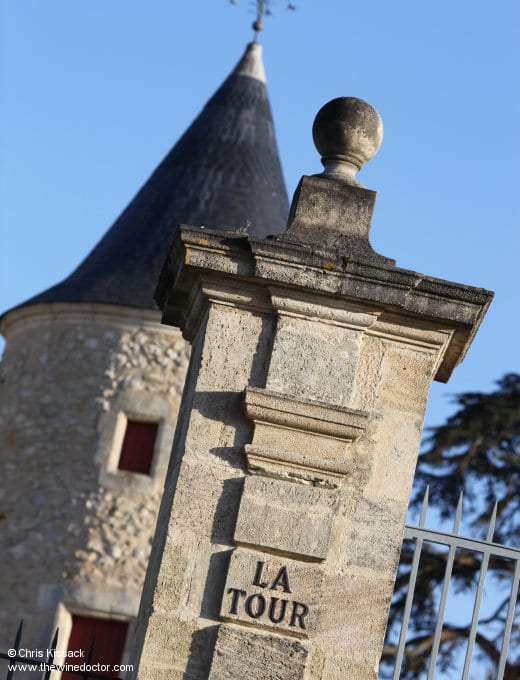 Who lived here, and who built this fortress, seems to be open to question, although it is maintained that the inhabitants were the ancestors of Charles de Secondat, Baron de Montesquieu, the 18th-century philosopher. The identity of more recent proprietors, and exactly when viticulture first appeared here, however, seem to be shrouded in mystery. What is known is that by the latter years of the 19th century there were established vineyards here, and the property begins to appear in the wine-related texts of the time, first receiving a name check from Wilhelm Franck who refers to it simply as Latour. At this time the estate came under the dominion of Charropin, a native of Bordeaux who accrued his wealth in the practice of law. He appears to have acquired the property from a merchant from Brienne, but otherwise we know little of the vendor’s identity.