Think of the appellation of Pessac-Léognan and your mind probably first turns to one of the more northerly estates close to Bordeaux itself, perhaps the twins Château Haut-Brion and Château La Mission Haut-Brion, or a near neighbour perhaps, such as Château Pape-Clément. That is because these estates typify the most commonly presented image of a Pessac-Léognan château; a grand mansion surrounded by its vineyard, held in by tall cast-iron railings, and all around the suburbs of Bordeaux, bearing down on each little enclave of vines, an ever present reminder of the menace of the French property developer. Another good example would be Château Les Carmes Haut-Brion, although sadly here the very pretty château lies hidden behind not railings but a drab concrete wall. Move further south and although the suburbs are less dense, they maintain a presence; every château a viticultural outpost surrounded by houses but here also areas of woodland, some quite expansive. 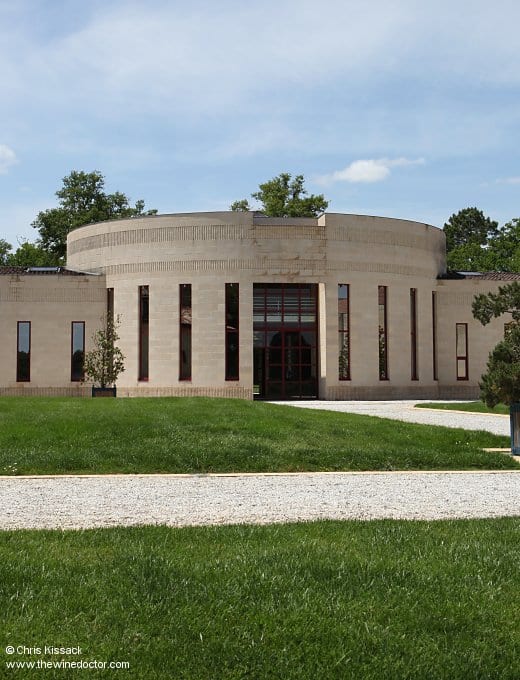 This is certainly true of Domaine de Chevalier (with its distinctive circular chai, pictured above), which is one of the more southerly of the Pessac-Léognan estates. Just to the east lies Château de Fieuzal, and beyond that near Martillac, Château Latour-Martillac. But there are certainly no properties of note to the south; in fact here, at Domaine de Chevalier, we have Pessac-Léognan’s other front, one where the châteaux do battle not against the suburbs, but against farmland and forest. Indeed, on one occasion that I visited the Domaine de Chevalier I decided to take a drive around the estate, to the south and then west, to see if there were any interesting photo-opportunities from this new angle.