I was not going to let the year 2020 pass without stopping for a moment or two in order to look back, now that the wines are celebrating their twentieth birthdays, to the 2000 vintage in Bordeaux. This is a vintage I have followed with great interest over the past two decades, and in that I am quite sure I am not alone. The opportunity to taste even a small selection of the wines at this stage in their lives, twenty years on, is therefore something I relish.

Early reports on the 2000 Bordeaux vintage, both during the barrel tastings, and when the freshly bottled wines were first released, were not infrequently gushing in their praise. In retrospect there is a possibility that some reviewers were sucked in by the millennial hype, the desire to have not just a great vintage (after the dreary left-bank wines of 1997, 1998 and 1999), but a great vintage with a ‘magic number’ on the label. Writing in the long-defunct Sunday Tribune after an extensive tasting of the vintage from barrel, in Bordeaux, the Irish restaurant critic Tom Doorley had this to say in 2002;

“Great things were expected of the 2000 Bordeaux vintage and it did not disappoint. Not only is it perhaps the most expensive claret vintage ever to have been presented, it is certainly one of the most hyped. I will exercise restraint and say that the wines resemble the celebrated 1982s…” 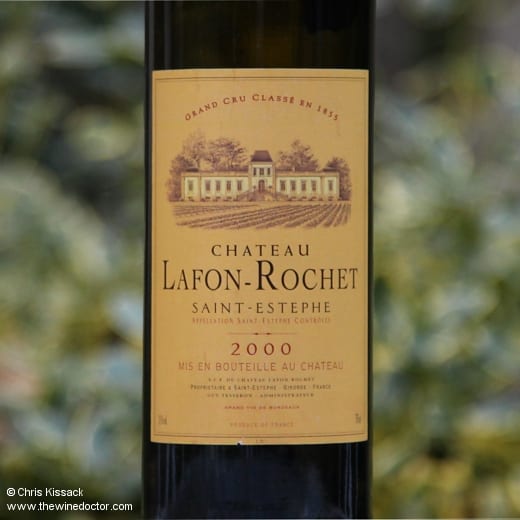 Such restraint! Acknowledging that it is difficult not to be distracted by the notion that the 2000 Bordeaux vintage was considered too expensive (looking back from 2020, I doubt there is a single reader who would not wish to return to the “expensive” prices we were asked to pay back then), the key point here is that the author clearly fell in love with the wines. As did many others. Having said that, I have never felt the vintage to be similar in character to the warmer 1982s (which to be fair I only ever tasted in maturity, having been barely out of primary school when the grapes were picked). Early tastings for me suggested this was a vintage characterised by a much cooler composition, the wines lithe, balanced and fresh, sometimes streaked with minty (love it or hate it) methoxypyrazine. Much more like 1996 (on the left bank, at least) than 1982.