Has there been any vintage in recent years about which so much has been written, and indeed decided, before anybody even did so much as taste a wine? I do recall quite a bit of buzz around 2009 Bordeaux, starting around harvest time, based on reports on the beautiful quality of the fruit, and the pure, intense flavours in the musts. On the whole that chatter was very positive, and that was appropriate. Having said that, even in 2009 I found that the only way to really get to grips with a vintage was to taste for myself, drilling down to the nitty-gritty detail, one wine at a time. Indeed, even among the fruit-rich delights of that vintage there were more than a handful, of over-alcoholic, sometimes over-extracted right bankers to be found. Success is never universal. Neither is failure, of course.

I think you have to go back in time one more year, to Bordeaux 2008, to find something with more parallels to what we have seen with Bordeaux 2013. There was a vintage that was panned from the outset, most notably by two journalists writing in Le Monde and Le Figaro; they made plain their thoughts about the wines of 2008 long before they were actually available for tasting. In doing so, however, they got it spectacularly wrong, as the vintage turned out to be rather a decent one. Not great, for sure, but not deserving of an ill-informed drubbing either. As it turned out their error was perhaps of some benefit to us all though, as these openly expressed doubts about the wines, together with the declining global economy, surely contributed to decisions to release early and with significantly lower prices. Château Angélus led the way in the first week after the primeur tastings, and first growths were available a few weeks later, to all-comers, at prices you could now only dream of. Anyone who had the confidence to buy early, as was my advice, before Parker’s scores came out and the prices rocketed (much to the chagrin of the Bordelais, who now saw they had priced the vintage too low), ended up with a relative bargain.

The 2013 vintage has been kicked around a lot more than 2008 was, although in the case of this more recent vintage the indications to do so are somewhat more solid than they were with 2008. This is a vintage described by old hands in Bordeaux as the worst vintage in thirty years, indicating that we have to look back beyond the lighter vintages of the 1990s which would usually serve as “bad-vintage” comparators, in particular the frost-bitten and rain-soaked 1991, to 1984 in order to find something comparable. In 1984 flowering of the Merlot failed and although the summer was warm, September was humid and picking was complicated by rain. The Merlot crop was tiny, and the Cabernets were of lesser quality. Describing the vintage in Vintage Wine (Websters, 2002), Michael Broadbent wrote “[t]he situation was exacerbated by the wines coming on the market at too high a price, in some instances higher than the ’83s, even ’82s.” He could almost be writing about 2013; there are certainly similarities in the growing season, and I fear his comments on prices will also ring true as we see the wines of 2013 being released. 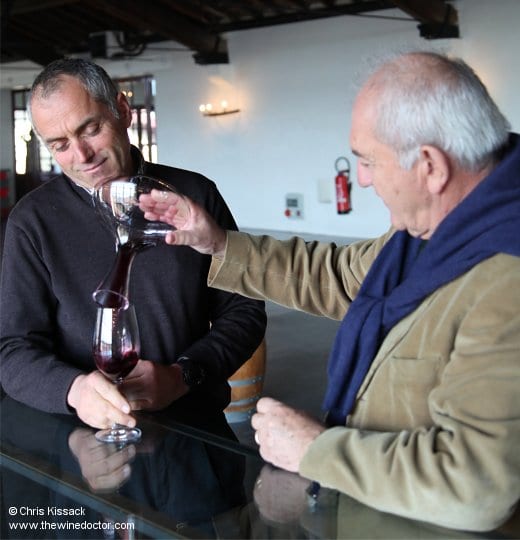 Indeed, as I write this introduction to the vintage the wines are already coming onto the market. In a startling move, Alfred Tesseron (pictured above, right, pouring the 2013 for winemaker Jean-Michel Comme) released the 2013 Château Pontet-Canet wine before the primeur tasting week even began. Fed up of critics bad-mouthing the vintage without even bothering to taste his wine, Alfred took the decision to cut them out of the picture altogether, releasing without the benefit (or hindrance, I suppose, depending on what was to be written) of critical review. And this was no lily-livered, cut-price, flog-it-quick release. Alfred set a worrying trend for pricing in the vintage, as he set the price as equal to the superior 2012 vintage. It is a stark indication of how times have changed. With 2008 Bordeaux, strident yet ill-informed criticism led to early releases, and lower prices. Similar anti-Bordeaux mud-slinging in the 2013 vintage, although much closer to the truth with regard to the quality of the vintage, led to an early, high-priced release. And since then others have followed Alfred’s lead, making what consumers will largely regard as token price drops. Château Gazin released before the primeurs week had finished, with a 3% drop, amounting to a reduction of just €1 per bottle compared to the 2012 vintage. The AXA Millésimes portfolio was released on the first Monday after primeurs, with most wines cut in price by less than 10%, the exception being Château Pichon-Baron, down 17%, although this still leaves it at more than €50 per bottle. Although successful wines will perhaps carry it off, helped by positive reviews and scores, I doubt that such small price cuts, if they roll out across the region as whole, will be enough to generate interest in the vintage.