It is Saturday afternoon, and I have just been speaking to the proprietor of a little-known Haut-Médoc château who told me he was glad to at last see the first real day of spring arrive. It is 24ºC, and as I am accustomed to Scottish weather – having now lived north of the border for eight years – these soaring temperatures feel like much more than spring to me. They have me in the mood for swimming trunks and a sun lounger, my fantasy afternoon hopefully culminating with a welcome dip in the obligatory piscine. Unfortunately, I have no such facility nearby. Instead, I find myself sitting in my hire car, looking out across an extensive vista of vines, most probably – in view of the proximity of the grand, multi-storied château (pictured below) – those belonging to Château Margaux. Well, I could think of worse places to park up, couldn’t you?

Why am I sitting here, lazily enjoying the view, instead of doing something more productive with my time? Or, perhaps even more appealing, maybe I should be looking for an unoccupied house with an inviting pool to commandeer? The answer is simple. Having finished a week of Bordeaux 2012 barrel sample tastings, I have only a few hours to kill before I have to be at Mérignac airport for my flight back to the UK. Normally I might spend such time taking a few photographs in order to update my Bordeaux profiles, but instead I think it is more important to get on with writing my report. Having been tasting for seven days, and chewing the Bordeaux 2012 cud with a variety of Bordelais winemakers, both famous and not-so-famous, I have a lot of words to write, and a lot of notes to type up. Where better to tap away at the keyboard than among the very vineyards about which I write? It sure beats the café at the airport. 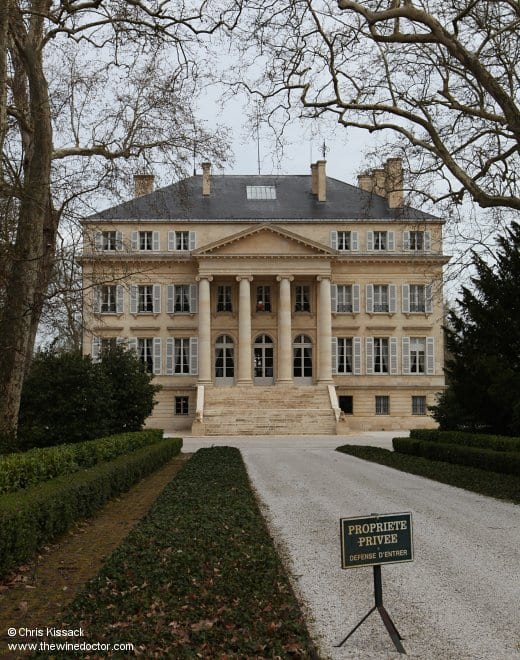 My comments on the glorious sunshine beating down onto the vines of Château Margaux are not merely a flippant introduction. Weather is an important part of the story of 2012, a year in which the growing season was – rather like that in 2011 – marked by unusual and striking weather phenomena. The sequence in 2012, however, when compared to 2011, was reversed. The 2011 growing season saw some warm spring and autumn weather, flanking a dull and dreary summer. The 2012 growing season was quite the opposite; spring was disappointing, dreary, wet and cold. Then came an August heatwave, and the Bordelais celebrated the eventual arrive of proper summer weather, rather as the château-proprietor mentioned above was celebrating the eventual arrival of spring. But the weather did not hold; come harvest time, the skies clouded over, and picking was complicated (and in some cases rushed on) by cool, rainy weather.