Georges Blanchard (1902 – 1976) was born in Donzy, a small agricultural settlement situated about 20 kilometres to the northeast of Pouilly-sur-Loire. During his life he published several collections of poems and a number of plays, nevertheless today he remains a rather obscure and peripheral literary figure. Perhaps his penchant for writing in the local Donzy patois, familiar to his farming neighbours but perhaps less readily appreciated by Parisian theatre-goers, restricted his appeal. Today he is regularly overlooked, his contributions overshadowed by those of Baudelaire, Mistral, Verlaine and the like.

This is a great shame, because Blanchard wrote in an eloquent style on the subject of France’s wines, in particular those produced on his doorstep. Having read it, who can forget his reference to the pieds tordus, the twisted vines, of the vineyards of Pouilly? Blanchard commented that the name of Pouilly was known the world over, thanks to the distinctive quality of its wines, and many decades later this poet’s assessment remains true, as the Pouilly-Fumé appellation is surely the only challenger to the supremacy of Sancerre in the Central Vineyards. While other nearby appellations, in particular Menetou-Salon, are home to some highly talented vignerons who turn out excellent wines, none provide the brilliant mineral thrust that we find in the wines of Pouilly-Fumé.

As with Sancerre, the vineyards of the modern-day Pouilly-Fumé appellation have ancient origins. The story begins in Gallo-Roman times, when a significant Roman road passed close to the river here, the route running from Genabum (these days better known by its modern name, Orléans) to the north, following the course of the Loire to the east and then south, and on to Noviodunum (modern-day Nevers) to the south.

In the 5th century there was a Gallo-Roman estate here known as Pauliacum, more specifically Pauliacum super fluvium Ligerim, in other words Pauliacum on the Loire. The property was presumably located close to the Gallo-Roman road, and although I believe physical evidence of both road and villa remain scant (to say the least), the potential existence of Gallo-Roman viticulture is the starting point for the history of the region and its vines. It is this Gallo-Roman presence that Masson-Blondelet cite with their domaine-level cuvée, Villa Paulus. In 680, barely two centuries later, records tell us that the bishop Vigile d’Auxerre (died c.689) presented his estate at Pouilly, complete with vines, to the Abbaye Notre-Dame-d’Auxerre. Had he, perhaps, taken possession of the original Villa Paulus? 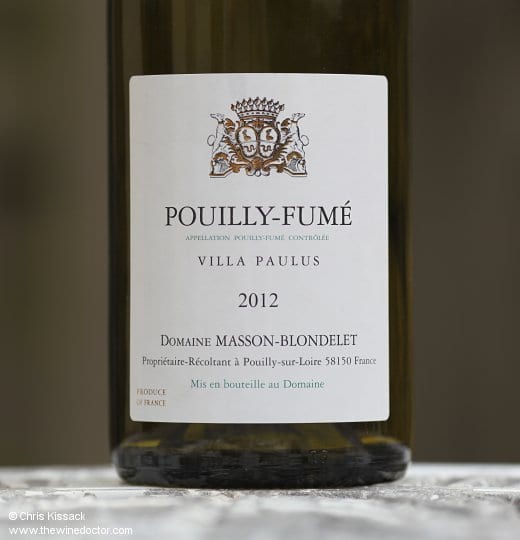 During the ensuing centuries the vine was fostered, just as it was in Burgundy, in St Emilion, along the Rhine, and elsewhere in Europe, by the church. A number of monastic orders played a significant role in the development of the Pouilly vineyard, the most notable of which were the Benedictine monks of Charité-sur-Loire, which lies just 13 kilometres upriver. These monks would have been just as keen to secure a reliable source of wine here as the canons of Bourges would have been when they planted the slopes of Chavignol. In Pouilly-sur-Loire today there still exists the Loge aux Moines (the monks’ lodge) a 4-hectare parcel located on the plateau to the northwest of the village, the name of which dates back to these times. Here the monks tended vines, but they presumably also hosted pilgrims and passing travellers in their lodgings.