As the Loire heads westwards from the Central Vineyards towards the Atlantic Ocean its course takes it over the many forms of limestones and marlstones which characterise the Bassin Parisien. Some of these rocks will be well known to those familiar with the wines of this region, especially those from the Jurassic period, most notably the Oxfordian, Kimmeridgian and Portlandian limestones and marls of the Central Vineyards. These rocks underlie two of the Loire Valley’s most famous vineyards, namely Sancerre and Pouilly-Fumé, not to mention several others including Menetou-Salon, and they are frequently referenced by vignerons working in these appellations.

As the river continues on its course the geological origins of the bedrock change, the river crossing progressively younger strata, moving from the Jurassic to the Cretaceous (to be precise the aforementioned Portlandian stage, which is not internationally recognised, actually straddles the two). There are, underlying the vineyards of Vouvray, Chinon and Saumur, rocks from the Cenomanian and Turonian stages, as well as the Senonian (which, like the Portlandian, is another European stage not internationally recognised). And indeed this is still the case as the river crosses into Anjou, with all three of these Late Cretaceous stages represented in the stratigraphy to the immediate west of Saumur.

This is certainly no longer the case as the Loire exits Anjou to the west, though, continuing to the Nantais, where as all lovers of Muscadet know the vineyards are dominated by schist, gneiss, granite and other old and well-worn rocks, with not even a pebble of limestone to be seen. This is because at the heart of Anjou there is a dramatic geological transition, as the river leaves behind the limestone bedrocks of the Jurassic and Cretaceous periods and flows onto more ancient metamorphic and igneous rock formations. The pale-coloured limestones of what is known as L’Anjou Blanc (white Anjou) are replaced by the mostly darker rocks of L’Anjou Noir (black Anjou), most famously schist like that found in the Nantais but also slate, shale, phthanite, spilite and many other forms.

The dividing line between light and dark runs (very roughly) north-south, just to the east of Angers. The course of the Layon sits right on the boundary between the two, in truth on the very edge of L’Anjou Blanc, but through erosion it has sliced through the more superficial limestone deposits creating a blurring of the boundary, and the Coteaux du Layon vineyards, such as Bonnes Blanches and the Coteau des Treilles (pictured below, in the foreground and distance respectively), are thus rooted on the ancient schists of L’Anjou Noir. A number of the region’s other most renowned vineyards, in particular Savennières and its associated appellations of Savennières Coulée-de-Serrant and Savennières Roche-aux-Moines, are also situated on L’Anjou Noir. 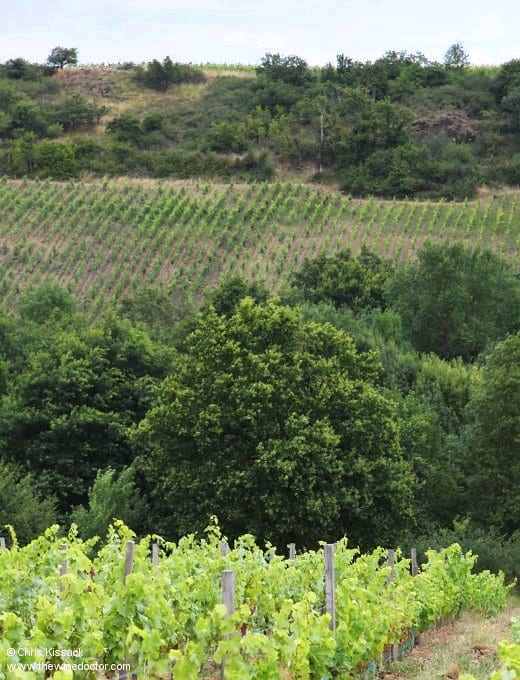 Regardless of this fact, it would be wrong to overlook the role L’Anjou Blanc and its limestone plays in this region, even though it can sometimes be difficult to see beyond the association of Chenin Blanc and schist (frequently with a little botrytis thrown in for good measure). The fact that the festival now known as the Paulée d’Anjou, an annual celebration of the region and its wines, was for many years known as the Paulée d’Anjou Noir with a focus solely on the wines of western Anjou, is testament to how even local vignerons can be blinkered to the existence of the vineyards on the limestone terroirs to the east.

To explore how the geology, the vineyards and the wines are connected, I will begin with a brief overview of the region’s geological history and an account of how L’Anjou Noir and L’Anjou Blanc came to be, which should provide a framework on which to examine in more specific detail the rocks and the wines of these two subregions on subsequent pages.