When Jéhuda Lévitan left his shtetl in Russia in 1880, choosing to begin a new life in France, nobody could have predicted the magnitude of the impact this decision would have on the lives of the vignerons of Martigné-Briand, on the banks of the Layon. Arriving in Paris with barely two francs to rub together, Lévitan earned his first crust as a door-to-door salesman, before setting up as a wine merchant, no doubt selling great wines from the Loire Valley (and perhaps other regions!) to a hugely satisfied clientele. This life did not seem to suit him though, as he then left wine behind, moving into furniture sales instead. With time his son joined him in his endeavours, and they soon had a fully-fledged family business on their hands.

What possible impact, you might ask, could a failed Parisian caviste have on life in Martigné-Briand, at the heart of the Coteaux du Layon appellation? The truth is in Lévitan’s case, and that of his son, probably none at all. But what about the next generation of this immigrant family, a young man named Jean-Jacques? Now that’s a different story. 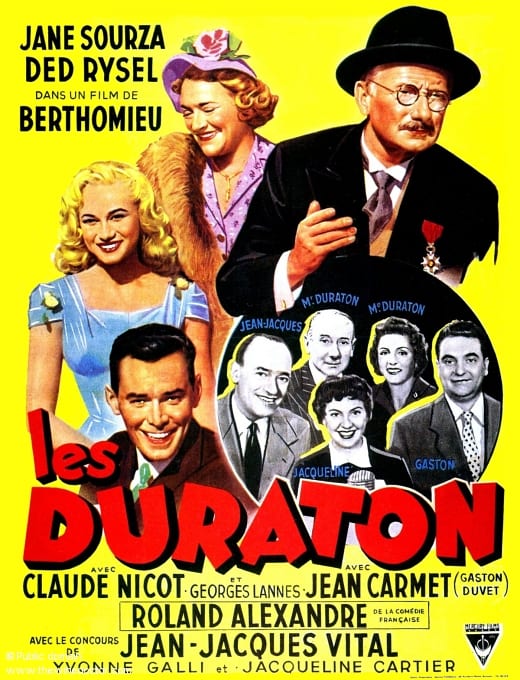 Lévitan’s grandson, Jean-Jacques Vital (1913 – 1977), had no interest in joining his family in selling tables and chairs, and was drawn instead to the arts, especially the new media of radio, television and cinema. Jean-Jacques was in luck; his uncle was Marcel Bleustein (1906 – 1996), later known as Marcel Bleustein-Blanchet (Blanchet having been his Resistance codename which he then appended to his own), who just happened to own Radio-Cité, one of the nation’s leading radio stations. Jean-Jacques created a radio soap opera name Autour à la Table, later renamed La Famille Duraton, which described the lives of the Duratons, an everyday French family. Running from 1936 on Radio-Cité until 1966 on Radio-Luxembourg, and giving rise to two spin-off films starring Jean Carmet (1920 – 1994), Bourgueil’s most famous son, the show made Jean-Jacques Vital’s career.

Everybody who was anybody listened to La Famille Duraton. And it was the love that Jean-Jacques’ lead character, Père Duraton, had for a glass or two (or three or maybe more) of Cabernet d’Anjou, which pushed this new style of wine into the limelight, and would contribute to the shifting of the viticultural landscape around Martigné-Briand.