Loire Valley Wine Guide: The Other Rocks of L’Anjou Noir

The Other Rocks of L’Anjou Noir

Having put the Saint-Georges and Brioverian schists of Anjou under the microscope in the previous instalment of this guide to the wines of the Loire Valley, it is time now look at the many other rocks that provide the vineyards of L’Anjou Noir with their geological complexity.

Most of these rocks are of igneous and metamorphic origin, and they include spilite, rhyolite, slate and quartz, and there are even seams of coal. But there are some sedimentary rocks as well, admittedly rare on this side of Anjou, but you can find little streaks of limestone and sandstone here and there. I will look at all of these rocks in turn, focusing first on the igneous forms.

Two of the most prominent geological structures (other than the great seams of schist already described, of course) are the band of spilite, and the complex mix of schist, psammite, sandstone, conglomerates and veins of coal that make up the Sillon Houiller de la Basse-Loire, both these geological structures sandwiched between the schists of the Unite de Saint-Georges to the north and those of the Série de Mauges to the south (as illustrated on the previous page). I will therefore begin with these.

Although often referred to as an igneous rock, spilite is a fine-grained rock more precisely described as metasomatic; having started out as basalt (volcanic-origin igneous rock) on the ocean floor, this progenitor material underwent chemical changes resulting from hydrothermal action (the combination of warm water and high pressure) which is known as metasomatism. This is fundamentally different from the process of metamorphosis, in which the chemical composition of the rock does not change, it being purely a rearrangement of how the mineral building blocks of the rock are ordered. In metasomatism the chemical composition of the rock does indeed alter, as the warm water dissolves some minerals, and others are deposited in the rock in their place. The two processes (dissolution and deposition) occur simultaneously, the rock remaining solid throughout, and thus basalt becomes spilite. 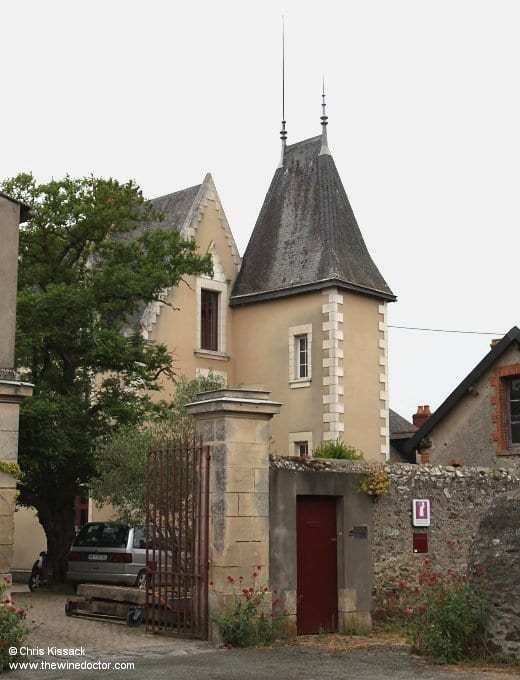 Most of the region’s spilite runs in a relatively narrow band on the southern border of the Unite de Saint-Georges, roughly parallel to the course of the Layon. It runs from just below Faye d’Anjou down to the slopes of Saint-Aubin-de-Luigné, interspersed with a little rhyolite at Rablay-sur-Layon. And about halfway down is the hamlet of Pierre Bise, where Claude Papin’s Château Pierre-Bise (pictured above; note the wall built from schist in the bottom right of the image, and of course the slate roof) is located. The name of the hamlet and château will come as no surprise to those who already know the meaning of pierre bise; it is a synonym for spilite.

Classic examples: A variety of wines from Château Pierre-Bise feature this terroir, including the Anjou Blanc and Coteaux du Layon cuvées from Les Rouannières, as well as the Anjou-Villages cuvée Sur Spilite. The Anjou Blanc Vent de Spilite from Domaine Ogereau is another good example.