The Schists of L’Anjou Noir

The western half of Anjou is often referred to as L’Anjou Noir, so named because its schist, slate, spilite and other rocks are often dark in hue, as opposed to the paler creams, greys and yellows of the limestones and marlstones of the Bassin Parisien to the east. Nowhere is this abundance of dark rocks more visible to the eye than up above, on the many roofs of the region; for centuries slate, in abundance and of good quality, has been the roofing material of choice here, on everything from peasant’s farmhouses up to the grandest of châteaux. And it is not just on the roofs; you can find schist, spilite and other dark rocks in the walls of many buildings, some classic examples being the 10th-century church in the heart of the village of Savennières, the rather grand Château de Serrant, the ancestral home of the noble Serrant family, one-time proprietors of Château de la Roche aux Moines and of course the Clos de la Coulée de Serrant, and perhaps most imposing of all, the towering walls of the ancient fortress at the heart of the city of Angers. Indeed, you can learn as much about Angevin geology through inspecting the walls of the region’s many churches and châteaux as you can by kicking over stones in the vineyard.

While all of these rock types deserve some examination, schist is by far the most extensive, and it is only schist that has taken on something that could be described as vinous-geological cult status. Indeed, it is the triad of Chenin Blanc, schist and botrytis that has brought fame to the wines of Anjou. Having said that, the most striking wines made here in recent times are perhaps those that eschew the third of these three components, more difficult than you might think, but that is a story perhaps saved for another time. I will thus leave botrytis to one side, and restrict myself for the moment to an examination of the region’s geology and what influence it may have on the region’s wines. I begin here with schist.

Schist is a metamorphic rock, the progenitor material for which is typically (but not exclusively) clay, mudstone or some other sedimentary material. The metamorphosis results from the material being subjected to prolonged periods of pressure and heat, the result of being buried deep beneath the surface of the earth. The original material is taken through several other forms first, beginning with shale, then slate, before we arrive at schist. Of course all three forms can be found in Anjou (as can gneiss, which is metamorphosed schist), and the distinctions are not clear cut, so you can find rocks which share some features of both shale and slate (such as the intermediate stage known as phyllite), or of slate and schist. As with many continuous processes in nature, distinctions between one stage and another are man-made and rather arbitrary. 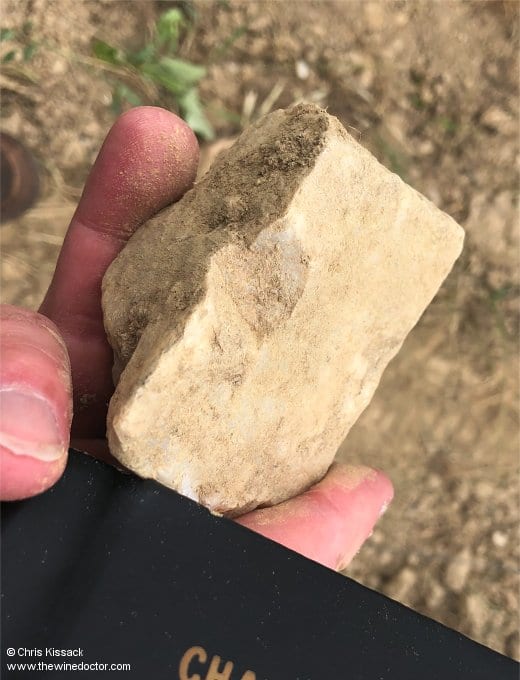 Like shale and slate, schist has a planar arrangement of its minerals, a feature known as schistosity, which means it can display a tendency to split along its length, and indeed the word ‘schist’ is derived from the Greek word for ‘to split’. It depends on the exact composition of the schist though; while schist classically splits into flakes, some types of schist are formed from larger mineral building blocks and thus break into solid chunks, making it a good brick-like building material. Other types of schist tend to have a more granular and friable character, such as the schist gréseux (literally, ‘sandstone-schist’) found in Anjou. Alongside the base minerals on which it is based schist often also includes some graphite, giving it the characteristic grey or black colour, but the presence of a variety of other minerals can lend the rock a silvery, yellow (pictured above, yellow schist from the Unite de Saint-Georges, more information on which below), blue, green or even purple hue. Schist is therefore many and varied in its forms; but it is that schistosity which defines it.