Upon reaching the Quarts de Chaume appellation we have arrived at the pinnacle of sweet wine quality in Anjou, and arguably in the entire Loire Valley. Surprisingly, we have not at this point covered every aspect of the Anjou moelleux style, as subsequent instalments of this guide will take us to Bonnezeaux (which I suspect most readers will be aware of, even if bottles are not regularly encountered), the Coteaux de l’Aubance and Anjou Coteaux de la Loire (an obscure but historically significant appellation). But for the moment let us step from the vineyards of Coteaux du Layon Chaume to its celebrated enclave, the Quarts de Chaume.

The origins and early history of the Quarts de Chaume vineyards are exactly the same as that of Coteaux du Layon Chaume, so I shall not repeat them in entirety here. Briefly, in 1028 Foulques Nerra (970 – 1040), a powerful Count of Anjou, donated to the Abbaye de Ronceray in Angers a swathe of land which included the village of Chaume (pictured below, its rooftops peeking out across the Quarts de Chaume vineyards), overlooking the Layon river. To make best use of this land the nuns of Ronceray gave consent to selected locals to work the land, under a system known as la tenure paysanne. The agriculteurs would have to pay the Abbesse of Ronceray for this right, of course, and this tithe would generally be a part of their crop, typically one-quarter (and so you can already see from where the name Quarts de Chaume is undoubtedly derived). 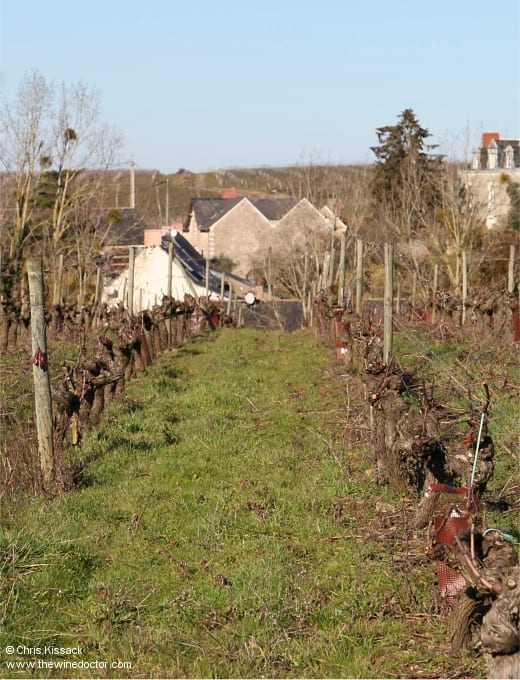 Records held at the abbey indicate that this was indeed the system used. During the 15th century the Seigneur de la Guerche, who had presumably acquired rights to work some of the land in question, paid the Abbesse with “the best quarter of the harvest, from the back of the slope facing south”, suggesting that the section we know today as Quarts de Chaume was already identified as producing the best wines. Other documents held at the abbey relate to the practice of viticulture on the site, including one which decreed the dates for the harvest in 1674. The wines clearly enjoyed some renown, and were highly sought after during the 17th and 18th centuries. It was surely these wines, among a few others, that the Dutch traders were willing to ship through Ingrandes despite the expense that incurred.