The cahier des charges for the Coteaux du Layon appellation, first drawn up in 1950, allowed six communes – or villages as they are often called – the right to append their name to that of the appellation. This was provided the wines met certain criteria in relation to the character of the harvest, the raw material and wine. Many decades later these six communal appellations remain in place, and by and large the wines that wear these names seem to merit the distinction. It is humbling to think that the local vignerons knew the locations of the best terroirs and the sources for the best wines long before the modern-day wine critic or wine writer came to prominence. In truth, these villages had been recognised for their special qualities for centuries; many had been identified 150 years earlier, in Nouvelle Géographie Universelle (published 1802).

There are approximately 500 hectares of vines planted within the boundaries of the six communes, representing not quite one-third of the entire Coteaux du Layon vineyard. Despite this the villages wines seem to completely dominate the appellation; the vast majority of wines with the basic Coteaux du Layon appellation I have encountered come not from regions outside the six communes, but from vignerons working within them who have, for one reason or another, decided not to append the name of the relevant commune. In many cases this is to make a distinction in quality across the portfolio, the non-commune wine serving as an entry-level cuvée. Other than these wines, I struggle to recall the last example of Coteaux du Layon I tasted that was not blessed with a communal designation.

Before taking a look at the six communes in turn, a brief aside; from an administrative and legal point of view a number of the communes described here no longer exist. In particular, in 2016 the communes of Champ-sur-Layon, Faveraye-Mâchelles, Faye-d’Anjou, Rablay-sur-Layon and Thouarcé were amalgamated to create a new, larger commune named Bellevigne-en-Layon. For the purposes of this article, however, because the wines still carry the names of these old communes I shall continue (for the time being, at least, and probably forever) to use the pre-2016 names.

Writing in Les Vins de Loire (Parisienne d’Editions Techniques et Commerciales,1956), Pierre Bréjoux cites a classification of the best communes of the Layon first drawn up in 1709, and even at this very early stage Faye-d’Anjou (vineyards and village pictured below) was ranked at the very top level of the appellation, alongside nearby Rablay-sur-Layon and Thouarcé. It is the uppermost of the six communal villages, sitting on the right bank of the Layon just downstream of Thouarcé. 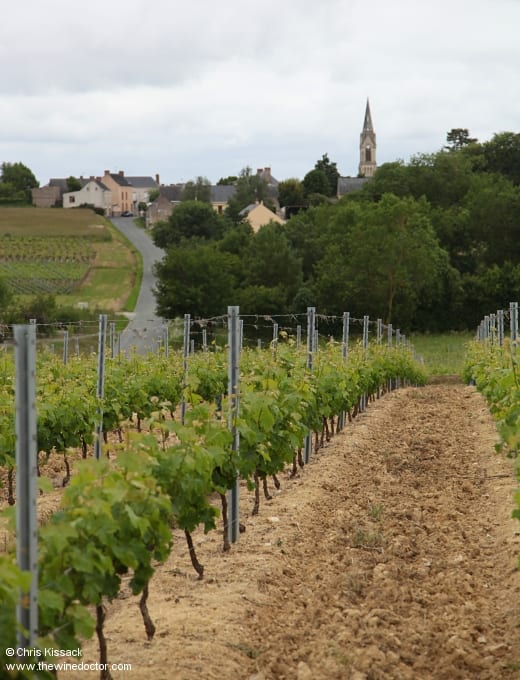 The village itself sits on the periphery of the Corniche Angevine, high above the river, at the top of a very narrow band of schist, part of the Unite de Saint-Georges. Here this band of schist is sandwiched between the alluvial deposits of the Layon which surround the river (to the south), and the later Cenomanian deposits which lie on the plateau of the corniche (to the north). Follow the band of schist downstream and we also find Mont Benault,  a village of some viticultural repute which lies within the commune of Faye-d’Anjou. Here, for example, we find the Noëls de Montbenault vineyard made famous by Richard Leroy (now renowned for dry Vin de France, but his initial focus was sweeter Coteaux du Layon). At this point the geology is more complex, the narrow band of schist joined by streaks of phthanite and rhyolite, the first veins of the band of spilite that follows the Unite de Saint-Georges, and a very narrow streak of the Sillon Houiller de Basse Loire.

Being a right-bank commune the wines tend towards a richer, more concentrated, more intriguing style, but it varies from one domaine to the next. Classic examples: The wines of Domaine de Juchepie are top examples of the style. Another superb vigneron worth tracking down is Pierre Ménard, although he tends to release his wine as generic Coteaux du Layon.