The Limestones of L’Anjou Blanc

Having examined the origins and extent of the various schists and other rocks of L’Anjou Noir, we now come to the remaining piece of the Angevin geological jigsaw, L’Anjou Blanc. Here, as the name suggests, we find a landscape of paler rocks, limestones and marls laid down over many millions of years, burying the darker seams of spilite and schist beneath them.

Just as with the famous Oxfordian, Kimmeridgian and Portlandian limestones of the Central Vineyards, the limestones and marls of L’Anjou Blanc are the result of a prolonged period of sedimentation, the region having been underwater for many millions of years.

The origin of the limestone beds of L’Anjou Blanc is in the late Cretaceous stage known as the Cenomanian (101 to 94 million years ago). This stage is named for Cenomanus, the Gallo-Roman name for Le Mans, which is built upon this deep bed of limestone. During the Cenomanian the sea level was higher than at any other time during the last 600 million years, so it is perhaps not surprising that much of this terrain was underwater. As already described in my introduction to the geology of the Anjou region, the landscape here was one of warm, broad and shallow seas with areas of low-lying land, including the weathered remains of the Hercynian range in western Anjou and the Nantais. During the Cenomanian the seas were home to great plesiosaurs (while the land was roamed by gigantic sauropod dinosaurs) but what contributed to the build up of limestone were the microscopic coccolithophores. There are larger fossils waiting to be found embedded in the limestone though, including the remains of those plesiosaurs, as well as ammonite species such as Acanthoceras rhotomagense, creatures which could grow to a metre across.

Following the Cenomanian came the Turonian (94 to 89 million years ago), a stage of significance to wine drinkers because while the limestone deposited during this time does indeed stretch down into Anjou, it plays a much greater role in the Touraine region, where deep beds of this material underpin some of the Loire Valley’s most renowned appellations, including Vouvray and Chinon. The Turonian stage is named for Turonia, the old Gallo-Roman name for Tours, which sits at the heart of this limestone landscape. When differentiating between the Turonian limestone and the older, deeper Cenomanian layers, the appearance of the ammoniate species Watinoceras devonense is a valuable marker. Again, ammonites ruled the seas (well, apart from the plesiosaurs), and their fossils litter the limestone beds as well as occasionally gracing the labels of the wines. 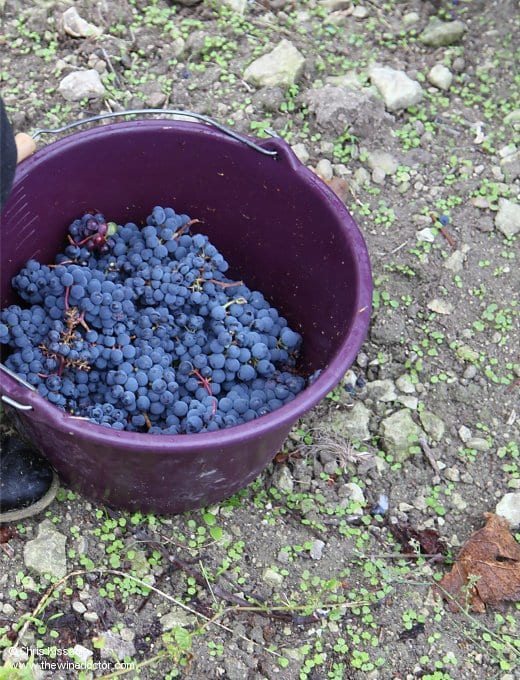 Finally there came the Senonian (89 to 66 million years ago), named by the French geologist Alcide d’Orbigny (1802 – 1857) after the Sénones, a Celtic tribe living in Burgundy. This is a stage no longer recognised by modern-day geologists, it having been divided into four shorter stages, the Coniacian, Santonian, Campanian and Maastrichtian, but for the sake of simplicity (and because it is what many of the local vignerons do) I shall continue to refer to it as the Senonian. Throughout the Senonian warm seas continued to wash over the Anjou landscape, as they had throughout the Turonian. This stage is also characterised by various species of ammonites, which existed until the extinction event at the end of the Cretaceous, and the eventual receding of the seas, leaving behind a deep bed of limestone known as the Bassin Parisien.