Having crept around the very peripheries of the Chamboureau vineyard unnoticed I reached the edge of the plateau, where I found my path blocked by a long and solid wall of grey, obdurate schist. Undeterred, I scouted along its length, finally coming to my objective, an opening at one end, a portal to what lay beyond. The gap in the stone was secured by a tall iron gate, or at least it was meant to be. As it happened I was in luck, as the gate stood ajar, leaving easily enough room for me to slip through. It was as if I was being invited to explore further. This, I reasoned, would be my defence if I were to end up in court for this act of trespass. “The gate made me do it, your honour”.

“Enter”, I thought I heard the vines calling from beyond the portal.

This took me surprise somewhat, as I had thought the vines would at least speak French. Nevertheless, now I could blame the gate and the vines. Putting to one side the thought that I might be imagining some of this, I eased through the gap in the portail and stepped onto the very edge of the plateau, the soils of schist and dry earth tumbling away into the valley below. I drank in the view, of the vines and of the Loire beyond, as a thirsty traveller may drink down a cold draught.

It was the first time I had ever stepped foot within the Clos de la Coulée de Serrant.

If there is just one ‘must-visit’ vineyard in the entire Loire Valley, then this is it. Yes, Les Monts Damnés is broader, taller and altogether more imposing, and no vineyard can challenge the ecclesiastical and viticultural supremacy of the Clos du Bourg, with the spire of Vouvray’s church poking above the vines, a potent and picturesque reminder of the acute elevation of Vouvray’s première côte. Neither of these, and none other, however, possess the sense of magic with which the Clos de la Coulée de Serrant seems to be imbued. 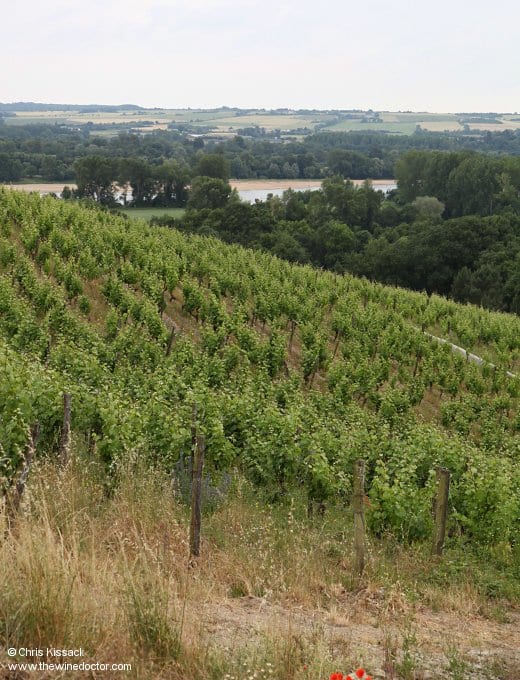 The land within the clos seems to achieve the impossible, rising and falling at the same time. The slope is steep, facing south-west, but in parts it is slightly convex, so that the vines seem to sweep over the land in both directions, both along the length of the clos and also up and down the slope. And no other vineyard along the length of the Loire Valley seems so ready to speak of its great heritage; few Ligérian domaines have more than a century of history, the evolution from polycultural peasantry to viticultural specialty having passed only two or three generations ago, and yet the Clos de la Coulée de Serrant can boast nearly a thousand years of viticulture, a rival to any of the great monasteries and their vineyards in Burgundy.