Moving up through geological time as it applies to the vineyards of Sancerre, Pouilly-Fumé, Menetou-Salon and their ilk, after the limestones and marls of the Oxfordian and Kimmeridgian stages, next in line is the Portlandian stage. At least that is how the local vignerons see it; as any geologist worth their salt knows, it is the Tithonian stage which follows the Kimmeridgian. In truth, the two terms refer to slightly different but overlapping periods of time, a point of geological confusion which I will explore in a moment. First up, let’s get to grips with the basics of the Portlandian stage.

It is common geological practice to name stages for reference sites, as we have seen with the Oxfordian and Kimmeridgian stages, which were named for Oxford and Kimmeridge respectively. The Portlandian is no exception, having been named for a location on England’s Jurassic Coast, which stretches from Orcombe Point near Exeter to Old Harry Rocks near Bournemouth. Just to the west of Kimmeridge Bay, which is also part of this ancient coastline, is the Isle of Portland, a land-tied island of limestone joined to the mainland by a thin spit of sandy beach. The cliffs at Portland Bill, on the southern tip of the island, which look out across the English Channel, are constructed of many layers of grey-white limestone which were laid down between 146 and 142 million years ago.

Over the years I have encountered Portland limestone on many occasions, although I have to admit at the time I did not necessarily realise it. The stone has long been recognised as a good choice for building, and it has been quarried on the island for many centuries. During the Roman era it was used in the production of burial sarcophagi, each one sculpted from a single piece of stone. More recently the stone has been transported to London where it was used in the building of numerous landmarks including St Paul’s Cathedral, the Tower of London and Tower Bridge. Wine drinkers, however, perhaps know it better for its appearance in various northern appellations in France, in particular Pouilly-Fumé, but others too, including Chablis. And while its wines may not have the same reputation as those from Kimmeridgian terroirs, it still makes an important contribution to the wine scene in these appellations.

Before going on any further, however, we have to clear up this Tithonian-Portlandian discrepancy, and where they sit in the geological sequence. Despite my introduction to the Portlandian above, the fact is the Kimmeridgian, which ran from 157 to 151 million years ago, was followed not by the Portlandian but by the Tithonian stage. This is the next stage in the geological timescale, as agreed by the International Commission on Stratigraphy, and it ran from 151 to 145 million years ago. This makes it the very last stage in the Jurassic Period, and it gave way to the Berriasian, the very first stage in the Cretaceous period. Unusually, the Tithonian stage is named not for a reference site but for Tithonus, a figure from Greek mythology. It was christened as such by the German stratigrapher Albert Oppel (1831 – 1865) in 1865. 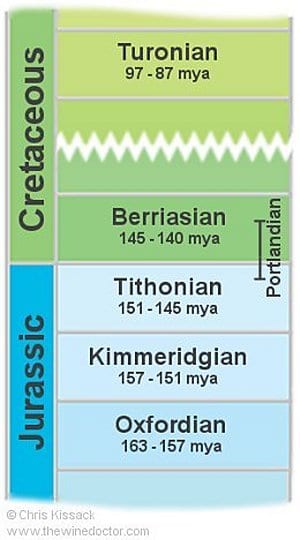 Even a brief inspection of the internationally accepted timescale (part of which is pictured here) makes plain that the Kimmeridgian is followed by the Tithonian. There is no mention of the Portlandian, the simple reason being that the Portlandian is a locally defined British stage, one which runs from 146 to 142 million years ago (as I have indicated in the diagram, left). It is not contiguous with the Kimmeridgian, and it overlaps the Tithonian (Jurassic) and Berriasian (Cretaceous) international stages.

Although this seems potentially confusing, regional stages which overlap the internationally agreed timescale are not that unusual. The Tithonian stage is also overlapped by the Penglaizhenian and Suiningian, regional Chinese stages, as well as the Puaroan and Ohauan, both regional New Zealand stages.

In writing this guide to the Portlandian limestones of the Central Vineyards, I confess that I was initially torn between whether to us the international system and stick with Tithonian, which is more technically correct as I will explain in a moment, or whether to use the more immediately recognised term Portlandian, which while widely used by the local vignerons is perhaps a less accurate description of the rocks into which their vines push their roots.

In the end, although I have begun with a discussion of the Portlandian stage, I think it important that we get used the idea of these rocks being Tithonian, for two reasons. First, although the vignerons of Pouilly-Fumé are wedded to the term Portlandian, the Bureau de Recherches Géologiques et Minières (BRGM) describe the rocks in this appellation as Tithonian, contiguous with those laid down during the Kimmeridgian. Secondly, even though some Tithonian rocks are also Portlandian, the rocks of interest in Pouilly-Fumé are early Tithonian, while the late Tithonian (i.e. Portlandian) rocks tend to lie further north, outside the appellation. While I acknowledge many vignerons continue to describe their terroirs as Portlandian, essentially using this term interchangeably with Tithonian, this is an inaccuracy which I will do my best to not further propagate. Indeed, I did think I should make the title of this page Tithonian Limestone, but I was worried that readers searching for information on the region’s Portlandian terroirs would overlook it, not making the connection between the two.

Now that I have that off my chest, I will next look at where the Tithonian rocks crop up in the appellations of the Central Vineyards.