The road on the left bank of the Loire, heading downstream towards Saumur, is something of a tourist magnet. On the right is the broad expanse of the river, the waters meandering slowly around islands and sandbanks; it can be a magnificent sight, especially in spring when the waters rise to fill out the valley floor (and not infrequently burst their banks). On the left is the imposing première côte of the Saumur vineyards, although it is not always easy to catch sight of the vines. There are some planted at the foot of the tuffeau cliff, but the première côte sits atop the limestone wall. Perhaps more immediately noticeable are the numerous troglodytic dwellings carved into the rock face, the most appealing of which are perhaps those at La Grande Vignolle, the Filliatreau domaine.

At a handful of spots, wealth and prosperity seems to have brought forth some of these rock dwellers, who stepped out from their converted caves to build sometimes grand maisons against the rock face. The caves, many of which which originally dug to extract stone for building, were no longer inhabited, and were turned over to other purposes. In this part of the world growing mushrooms was a common activity, as was winemaking; the many kilometres of tunnels, great galleries and caves, offered huge storage capacity, especially useful if making sparkling wine. The farming of silk worms was also popular, although this was an activity more associated with Touraine than with Saumur. 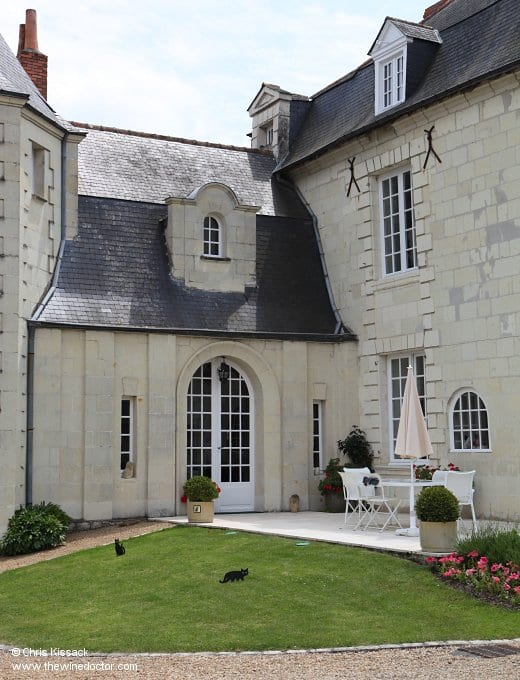 One or two of these maisons grew, over the centuries, as new rooms were added and the sense of grandeur enhanced, and sometimes winemaking facilities would also appear or be upgraded, as this activity became more and more significant. One good example of a domaine that developed in this manner is Château du Hureau.