Many wine lovers enjoy the drive along the D2 in Bordeaux, past many of the grandest châteaux of St Estèphe, Pauillac, St Julien and Margaux. For those who have gravitated to Burgundy instead, the RN74, which runs parallel to the greatest vineyards of the Côte d’Or, must provide similar delight, the east-facing slopes bearing some of the greatest vineyards in wine, from Chambertin down to Montrachet. It should come as no surprise to learn that there are similar sightseeing hotspots of interest to the wine-minded visitor along the length and breadth of the Loire Valley. One of my favourites is undoubtedly the D21 which runs along the foot of the limestone slope from Chinon through Cravant-les-Coteaux to Panzoult, roughly parallel to the course of the Vienne.

This is the Loire Valley’s version of the Côte d’Or. Indeed, as I recently walked down the slope of La Croix Boisée with Matthieu Baudry he likened the manner in which the soils change as you move through the vineyard, from sandy clay, to clay and limestone at the foot, to pure limestone near the summit, to the slopes above Nuits-Saint-Georges and Beaune. It is because of this very beneficial terroir, the upper sections being ideal for both Cabernet Franc and Chenin Blanc (so are the lower sections in truth, but in general the higher up you go the more interesting the wine), that any domaine or indeed any vineyard located along this slope, looking down onto the mildly meandering route of the D21, is worthy of investigation. Remarkably, some of these domaines remain relatively under the radar. One such is Domaine Grosbois, when Nicolas Grosbois has held the reins since taking over from his parents. 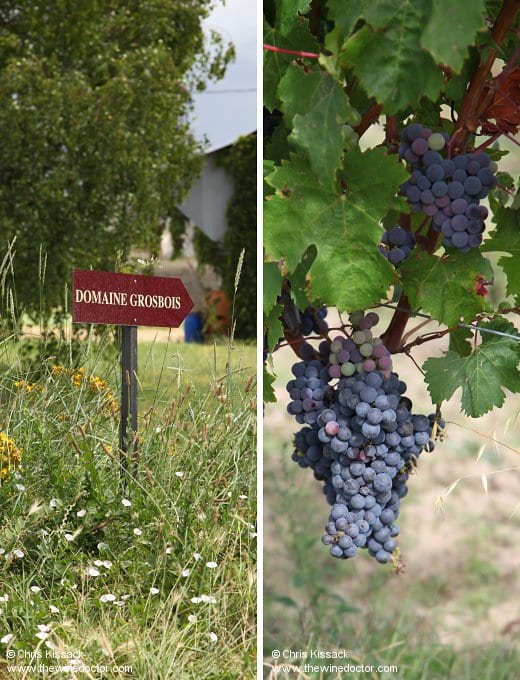 It is not uncommon in the Loire Valley’s many appellations to hear tales of polycultural smallholdings being converted to purely viticulture, or of agriculteurs torn between their vineyards and their orchards. In the case of Domaine Grosbois, Nicolas’ father Jacques Grosbois was an arboriculteur from Azay-le-Rideau who tended several expansive orchards of apple and pear trees, with no vines at all. This came to and end around 1990 though; a crisis in the market for apples convinced Jacques that he should diversify, or even change tack altogether. He chose the latter option; the orchards were sold, and they found a domaine at Le Pressoir, on the road out to Cravant-les-Coteaux, that which today we know as Domaine Grosbois.