Within this report on the red wines of the 2005 vintage in the Loire Valley at fifteen years of age I present the bulk of my tasting notes. That perhaps seems a little incongruous; after all, from Muscadet close to the Atlantic coast, all the way up to what is surely the Loire Valley’s most famous appellation, Sancerre, close to the very centre of France, this is a region known best for its dry white wines. And, of course, between these two extremes, from the great vineyards of Anjou and Touraine, also its sweet wines, resolutely white of course (apart from that botrytised Cabernet Franc experiment Jo Pithon once poured for me… but that’s another story).

At the risk of repeating myself, however, the region should no longer (if it was ever true) be viewed as a white wine region, the occasional (or even infrequent) successes in red mere curiosities. The ripening of red varieties, from Cabernet Franc to Côt, is now the norm in the Loire Valley, and the red wines of any particular vintage must be judged on nuances of quality and character, rather than a simple assessment of whether the wines are ripe, a little bit green, or too green. The region is entering a new era, one which I anticipate many drinkers will be slow to adjust to, and I suspect those who find themselves drawn to the acid structure and methoxypyrazine levels of Loire Valley reds may well resist and probably resent these developments.

And, as noted in my introduction, it was the 2003 and 2005 vintages which heralded the arrival of this new era. 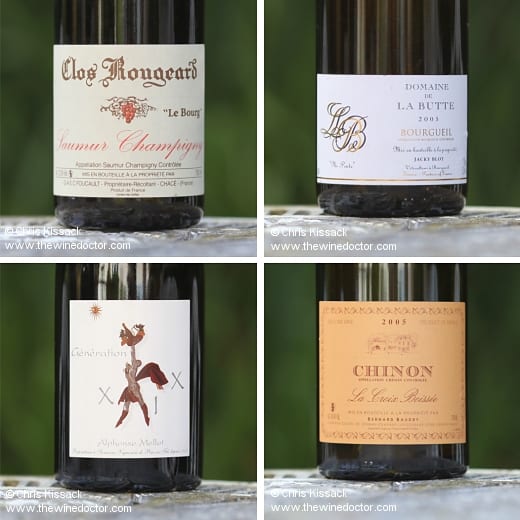 I for one do not resent these developments. To my palate low levels of methoxypyrazines can add complexity and interest to a wine, but they should not define a region or a style. And moves to accentuate this character, like those that were encouraged by the Project Cabernet Franc team over a decade ago, were the wrong direction for the region (just as permitting the blending of Chardonnay with Melon de Bourgogne is the wrong direction for generic Muscadet). What defines Loire Valley Cabernet Franc (I focus on this variety thanks to its dominance and its spiritual association with the region, but of course there are other relevant varieties) in youth is its purity and great ability to express terroir; the structure and quality of its tannins when on limestone, the supple joy of a cuvée from alluvial soils, and so on. In age, meanwhile, its strength is its silky purity, a halfway house between right-bank Bordeaux (for the tannic structure) and Burgundy (for that ethereal, diaphanous texture). This is why I follow this region. And now I don’t have to look solely to vintages such as 1976 or 1989 to get my kicks.