I finish up this series of tasting reports on the wines of the 2005 vintage at fifteen years of age with a handful of wines at the sweeter end of the spectrum. Even with the inclusion of demi-sec styles here, the total number of wines in this final report comes to a mere eight. Now you understand why I include the demi-sec notes.

While the number of wines is small, though, there is no deficiency in quality, as these eight wines come from four great domaines. In Vouvray we have what are widely regarded as the two top names in the appellation, Domaine Huet and Domaine du Clos Naudin, and they are joined by a third highly respected vigneron whose wines I seem to be drinking more and more frequently with every passing year, François Pinon. The fourth domaine to join the fray is another old favourite, from the Coteaux du Layon, none other than Château Pierre-Bise. It’s a strong line-up. 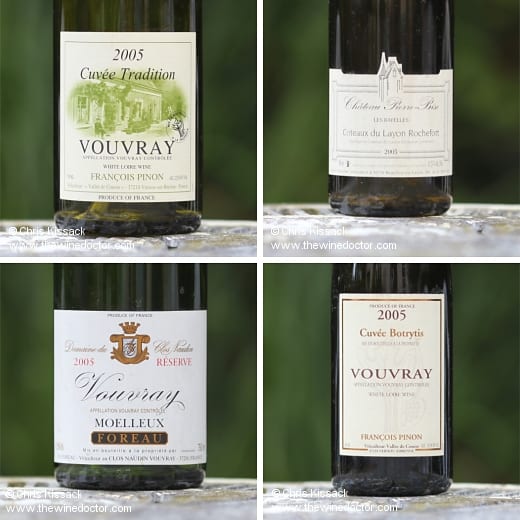 To be frank Anjou is not widely represented here, with just one wine the 2005 Coteaux du Layon Rochefort Les Rayelles from Château Pierre-Bise. But what a wine! This has long been an impressive cuvée, the style deep into the lush, hedonistic, crème caramel end of the botrytis spectrum. If nervosity and minerality is your prime objective, this might not be the wine for you; if you are up for a dose of pure pleasure, however, then Les Rayelles is very often a cuvée worth looking out for. The 2005 is certainly true to form in this regard.