It never ceases to amaze me how easily a vineyard can swallow up an entire troupe of people. I was on the hunt for the team from Domaine de la Noblaie, who I knew were out picking on a surprisingly warm and sunny afternoon, one Thursday early in October 2019. Having driven up past the domaine I was halfway up the limestone côte when I made a very tight right-hand turn, with a modicum of difficulty it has to be said, before I then allowed the car to coast down the narrow, single-track Rue de l’Ours. The land here is banked up on either side of the tarmac, lifting the vineyards out of view, but I knew that somewhere further downhill I would find Les Blancs Manteaux, the vines which provide Jérôme Billard with one of his two single-vineyard Chinon cuvées. 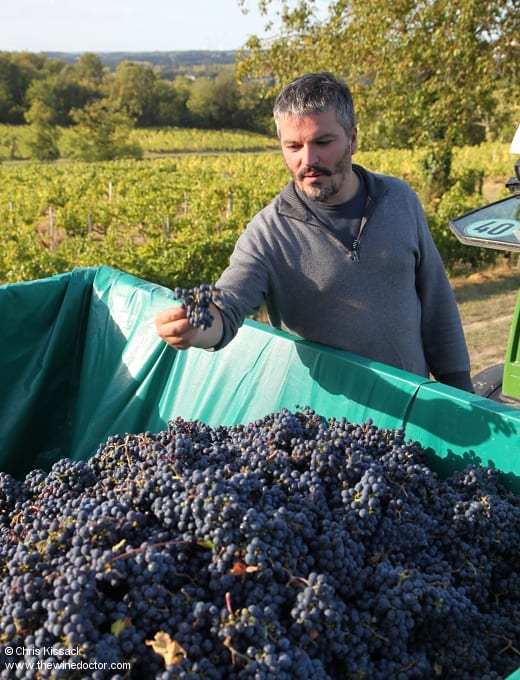 I trundled and bumped along for 300 metres – thankfully meeting no other vehicles coming in the opposite direction – when the high banks on either side began to fall away. The road was still heading downhill towards the broad valley of the Vienne, but it no longer cut so deeply into the land, and I could see the vines of the Chinon appellation all around me once more. And here was my first clue; on the stakes at the end of several rows on my left were hung woolly hats, cloth bags and various aged and somewhat threadbare sweaters, temporarily discarded as unnecessary in the warmth of the afternoon sun, while the ground was littered with thermos flasks, lunchboxes and bottles (with an emphasis on the latter over the first two, it has to be said). I pulled the car up onto the steep grass bank, jumped out and immediately scoured the vines for any sign of the owners of these items. There was not a person in sight; but in the distance I could hear the gentle murmuring of voices. Following this lead, I struck out into the vines, past vines still heavily laden with darkly ripened bunches, in search of Jérôme and his 2019 harvest (pictured above).