The 2011 vintage is an unusual one, in some ways akin to 2003, most pointedly in the fact that it was a record-breaking year which has probably not bestowed any record-breaking wines upon us. There were early indications that this might be something other than an ‘ordinary’ year when Météo France reported that April had been the warmest on record since their records began in 1900. In fact both spring and autumn were unseasonably warm, and yet they flanked a rather less enthralling summer which was remarkably cool. Vignerons who had been wearing short-sleeves as they worked in the vineyards in April and May found, to their consternation, that in July and August they were wrapping up in sweaters and scarves before venturing out among the vines.

Despite this disappointing summer, spring and autumn were so remarkably warm that the overall effect was to push 2011 into the record books. The warmer than expected temperatures during these two seasons were sufficient to raise the average temperature for the entire year to previously unseen heights. And thus 2011 has usurped 2003 as the title holder for France’s warmest year since 1900, as can by seen in my plot below, despite the absence of the dramatic summer heatwave that characterised the deposed vintage. The mean temperature for 2011 was 1.5ºC above the 1971-2000 average, and high enough to force me to slide the temperature scale on the y axis down a little, as you will see if you compare it to the plot I made for my 2010 Loire vintage report. 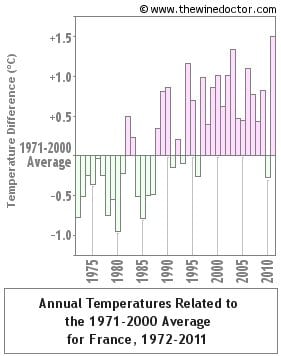 In some regions daily records for high temperatures have been broken, although in most cases recorded figures tend to fall short of those from 2003, which on the whole saw more extreme temperatures in shorter bursts than 2011. In some regions excessive rainfall engendered mildew, and later as the fruit ripened rot. But in other regions some vignerons were more concerned with the drier months, and at times they found themselves wishing for more rain. Yet again we have another vintage which proves that the Loire cannot be considered as a single amorphous region; how curious that, when it seems so readily acknowledged that Bordeaux can have ‘left bank’ and ‘right bank’ vintages, many writers still regard the Loire as a single region in which a vintage can be summed up in a single score, note or soundbite. In a vintage such as 2011 it’s clearly not the case.