I continue my review of the 2005 vintage at fifteen years with a baker’s dozen of white wines, starting with a lone sparkling wine from Vouvray, followed by twelve still wines, starting down near the Atlantic coast in Muscadet, and continuing upstream through Anjou and Saumur, with the bulk of the wines tasted from Savennières and Vouvray. To reiterate the point made in my introduction to this report, these are all dry wines, as any with more than a hint of residual sugar I have held back for my final report, looking at the demi-sec and moelleux cuvées.

I have the feeling that many people doubt that the dry whites of the Loire Valley, devoid of any significant amount of protective residual sugar, can age in a positive fashion. This is despite a number of the domaines and appellations included here having a track record of performing well in the cellar. Well, in my cellar, at least. This certainly seems true of Savennières and Vouvray, as the majority of these wines included here showed well, and evidently still have gas in the tank. But from the right domaine, perhaps in the right vintage, it seems to me that less prestigious appellations such as Muscadet and Anjou should not be overlooked.

Looking to the most exciting wines first, these come from Anjou and Saumur rather than, as you might have expected from my words above, Savennières or Vouvray. Beginning in Saumur, the 2005 Brézé from Clos Rougeard was unexpectedly good. Such a high rating for this wine is not, I must stress, a fait accompli; while I have been a fan of the domaine’s red wines (and I will get on to those in the next instalment) for as long as I can remember, long before they achieved the cult status and stratospherically high prices they currently command, I have always found the whites a little less captivating. 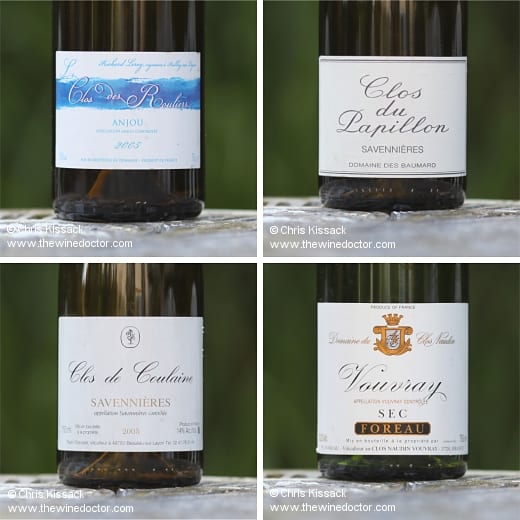 A number I have tasted, including a 2001 vintage at the domaine only last year, have aged in a rather oxidative fashion, disappearing down a rabbit hole of brown, biscuity, nutty and bready flavours. I know such wines appeal to some fans of the Loire Valley, but I’m far from a committed fan. The 2005 is much more my style of wine, indeed it is the complete opposite of what I was expecting. Tense, reductive (even at fifteen years!), minerally, reticent and challenging, I regret not having at least one other bottle languishing in the cellar, as I think this could be amazing in five or ten years time. At current prices, though, I won’t be buying another one to see if this prediction comes true (not even if I could even track down a bottle for sale, which I doubt).