If you were to trace my knowledge of Bordeaux through the 20th century it is during the 1980s that it begins to deepen. Over the years I have of course tasted wines from many older vintages, from the 1970s and 1960s back into the first half of the 20th century, such as this All The Nines in Bordeaux tasting, which started with the 1929 vintage. But I would say my own understanding of the region, opinions formed around extensive and repeated tastings of the wines rather than occasional encounters with potentially dodgy old bottles really begins in the 1980s. When I cut my teeth on Bordeaux it was with this decade; I quickly became familiar with the too-easily overlooked 1981, much-hyped 1982 and frankly under-rated 1983 vintages, the wines of which I have returned to many times since. Take me back a few years though, into the 1970s, and we are in less familiar territory.

Right on the cusp, sitting at the very edge of my guide to Bordeaux and its vintages, is 1980. Coming after a run of several late-ripening and challenging years (see, I do know something about 1970s Bordeaux), 1980 was another late harvest for the region, the fruit picked under difficult and stormy conditions. The problems began in May and June, when a prolonged period of damp and cool weather both delayed and prolonged the flowering. As a result there was both coulure and millerandage, and even that fruit which did set successfully the subsequent ripening was heterogeneous. What is worse, the dreary weather continued through July, so the vines slogged along at a snail’s pace. It was looking like another slow year and another delayed harvest fraught with the risk of rain. 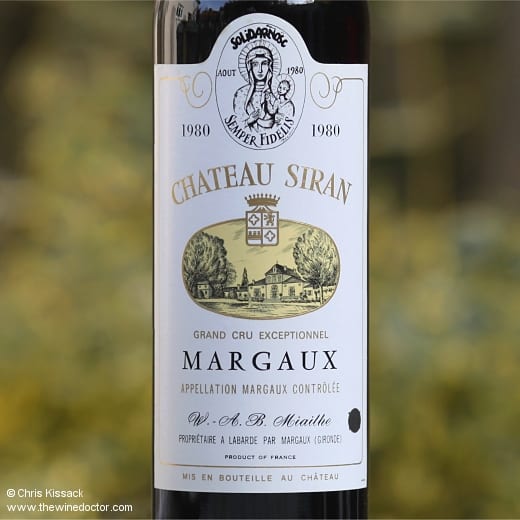 It was in August that the vintage turned around, albeit just a little. Sunny weather brought about a véraison in the middle of the month, three weeks behind the norm for the era. The vines were helped by a warmer than expected September, but conditions became so warm and humid it resulted in a series of thunderstorms, bringing rain at harvest time, a defining moment for the vintage. Some picked before the rain, while some waited and picked afterwards, many that did so recording their latest harvest for sixty years. Some just soldiered on regardless. In Vintage Wine (Websters International, 2002) Michel Broadbent (1927 – 2020) wrote of the 1980s and its first vintage, “it certainly opened with a whimper…an average-sized crop of less than average quality”. Many wines were on the lighter side, and by the 1990s some prominent commentators of the day were already suggesting the wines be drunk up.

Margaux was perhaps slightly more favoured than other regions though, with Château Margaux often praised as first among the firsts in this vintage. And opinions were not universally negative; David Peppercorn, writing in Bordeaux (Faber & Faber, 1991), described the 1980 from Château Siran, this very wine, as “delicious”.

Happily I was recently able to take a look at 1980 Château Siran for myself, thanks to a bottle sent over by proprietor Edouard Miailhe. Of note, this was the first vintage in which the Miailhe family commissioned an artist to create a work to grace the label. They chose Albert Decaris (1901 – 1988), a renowned engraver, whose submission references the creation of Solidarność, the trade union born in the Gdansk shipyard in August 1980 which grew into a broad social movement and which ultimately saw democracy return to Poland. As for the wine (you knew I would get around to it eventually) it certainly shows its maturity in the glass, with an immediately apparent pale hue, but with plenty of warm, leathery, brick-red tones to it. This sense of warmth and welcome continues on the nose, which shows an undeniably evolved character, which despite the weaknesses of the vintage is far from shy. It has a bright expression, with intertwined scents of black truffles, chestnut mushrooms and black tea leaves, set with little savoury notes of black bean and pepper. This charming style continues on the palate, although I found it best poured at a temperature just above cellar-cool to keep the wine’s delicate vigour alive. Here, like the nose, the delicately textured palate carries swirling notes of truffle and black tea leaf, along with greener notes of tobacco leaf and green peppercorn. It is lightly formed, with an admittedly lean, taut and acid-framed texture, but there is at least a little length to it. I think it is safe to say for the reputation of the vintage this was a real surprise. If you have any, though, it is certainly time to pull those corks! Drink up. 89/100 (22/3/21)