The genesis of Château Kirwan can be traced to the 17th century, when the land was part of La Salle, an estate in the possession of the noble La Salle family, sometimes referred to as La Terre Noble de la Salle, which was part of the seigneurie of Issan. In 1751 the noble proprietor François Renard de La Salle sold a large part of his estate, around 19 hectares, to Sir John Collingwood (1682 – 1760), a négociant who traded out of the quayside warehouses of Bordeaux. He paid 120,000 livres (the currency that predated the franc) for this plot of land, leaving just 16 hectares in the hands of the La Salle family, a vineyard which subsequently went by the name of Ganet.

Sir John Collingwood’s only daughter Elizabeth Ann-Marie Collingwood (died 1816) married Mark Kirwan (1735 – 1805), an Irishman from Galway who was seigneur of Naugé and Bruca. Mark took control of the estate, and in 1775, some years after his father-in-law’s death, he decided to rechristen it. His name has remained faithfully attached to it ever since.

Mark Kirwan seems to have established a very good reputation for his estate. It came to the attention of the courtier Labadie, as he drew up a report on the estates of the region for the Intendant Général of the Guyenne in 1776. He classified the estate as second in the commune of Cantenac, a judgement he made based on the wine’s sale price of up to 800 livres per tonneau, a very favourable figure compared to the other châteaux in the commune. Only Gorse, better known today as Château Brane-Cantenac, was ranked higher, the asking price for this wine a commanding 900 livres per tonneaux. 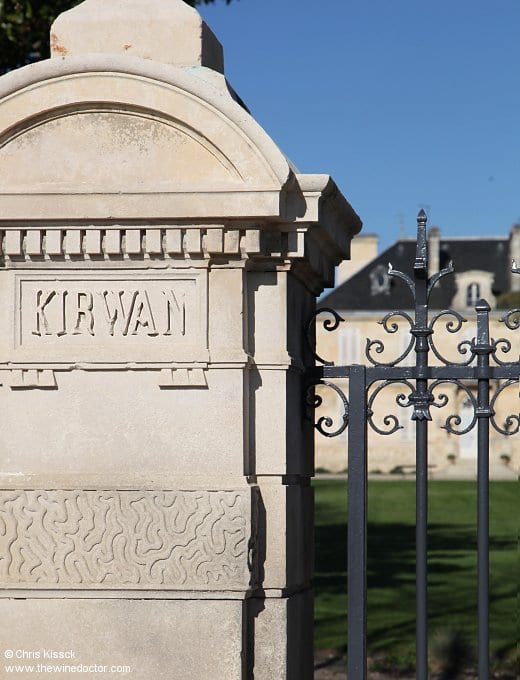 The Kirwan estate was also one of several vineyards to be visited by Thomas Jefferson (1743 – 1826), onetime ambassador to France and subsequent US President. Jefferson had a passion for wine, and many Bordeaux estates played host and sold their wine to this travelling oenophile. His records from 1780 tell us that he was very impressed with the wine of Quirouen which, allowing for difficulties in pronunciation, must surely refer to Kirwan.