The origin of Château Marquis d’Alesme can be traced back to 1585, when the estate was created by François d’Alesme (1535 – 1612), a conseiller in the Bordeaux parliament. Viticulture quickly followed, and records indicate that by 1616, and perhaps before that, the wines of the estate were on the marketplace alongside others from the Médoc. Following the death of François d’Alesme the estate was transmitted through the family, from one generation to the next, although there are few details on exactly who was running it, and what they did to improve the domaine.

The next proprietor of whose identity we can be certain was Pierre-Vincent-de-Paul d’Alesme, a chevalier and Seigneur de l’Estreil, who was made a marquis by receipt of letters from Louis XVI (1754 – 1793), France’s last king before the Revolution. Pierre-Vincent-de-Paul married Marie-Thérèse d’Arche, from a similarly noble family, on March 30th 1772, and their estate then took on the name of Cru d’Arche d’Alesme. The estate seems to have developed a decent reputation, as it soon came to the attention of the courtier Labadie, as he drew up a report on the estates of the region for the Intendant Général of the Guyenne in 1776. He classified this estate as a fifth growth in the commune of Margaux, a judgement he made based on the wine’s sale price of up to 625 to 650 livres per tonneau.

The property remained in the hands of the d’Alesme family up until 1803, at which point it was acquired by a Dutch négociant, Jan Bekker Teerlink (1759 – 1832). He was one of numerous buyers in the region from among the merchant class, who were ready to fill the ownership void after the region’s nobility lost their heads, their liberty or their wealth (or all three) as a consequence of the Revolution. A number of these merchants were German, such as Herr Lerbs who acquired Château Malescot St-Exupéry, and Jan soon found that his name Bekker had been Germanicised to Becker. Appending this to the name of his new acquisition gives us Château Marquis d’Alesme-Becker, a name by which this estate went for many years. 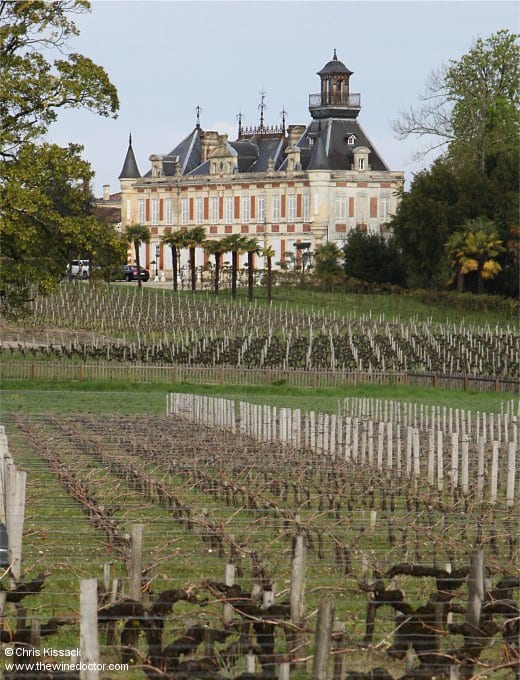 Jan Bekker Teerlink had married Jeanne Sophie Jaunein, and they had a daughter, Sophie Fanny Teerlink (1810 – 1874). After Jan’s death in 1832 the running of the estate presumably fell to his widow Jeanne and daughter Sophie, but they subsequently sold the estate in 1853. The buyer was one Monsieur Sznajderski, who was therefore in charge when the estate was classified as troisième cru classé in the 1855 classification. He was presumably responsible for the construction of the château, built in 1859, in the style of Louis XIII. This was a relatively diminutive maison, built among the vines to the west of the village of Margaux. These days, however, it no longer serves as the château, nor does it belong to the estate. It sits within the grounds of Château Lascombes, and serves as that château’s offices. I will explain how some of the appellation’s châteaux changed hands as I continue this estate’s history.