Almost directly west of the village of St Estèphe is the rather unprepossessing hamlet of Pez. This little settlement consists of not much more than two streets, one running north, one running west, each one lined with residential properties, very much in the western suburban style. They present a superficial image of a grand, expansive suburb, but do not be fooled; these houses are lined up in single file, and just on the other side, in every direction you look, there are vineyards. We are still very much in wine country here, the appellation remains St Estèphe, and in fact there are almost as many wine-producing châteaux in Pez as there are residential properties. Well, perhaps not quite, but you get the idea. 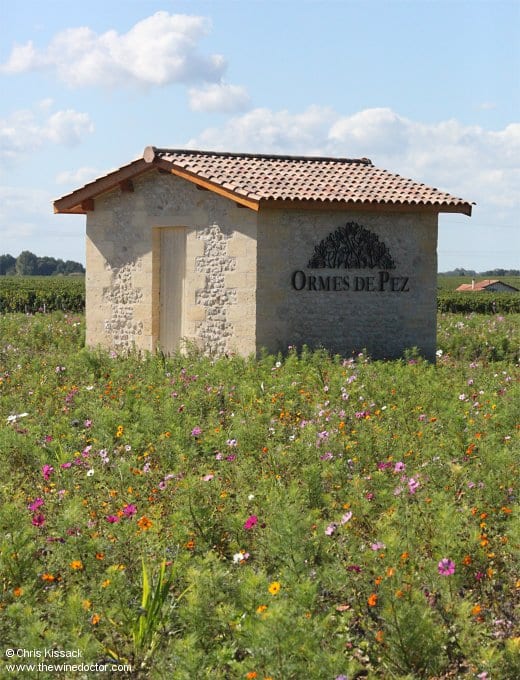 The most prominent château here is surely Château de Pez; it sits on the very southern limit of the village, surrounded by a broad and flat expanse of vines, and it is impossible to overlook this property from any point to the east or south of the hamlet. Just 100 metres to the north, however, lies a rather less prominent and somewhat understated château, sitting on a corner behind a low stone wall topped with iron railings, shielded from prying eyes by a small arboretum sitting directly behind the railings. This is, as the sign on the railings reveals, Château Ormes de Pez. That Pez relates to the hamlet of the same name should be obvious; less immediately apparent, other than to French speakers of course, is the origin of ormes. This translates literally as elms, and would seem to betray the presence of a copse of these trees, long since disappeared, near the château. They succumbed, I am told, to a sequence of disease and bad weather. There may not be elms here any more, but suddenly it seems appropriate that the château should spend its time hiding behind a garden of trees.