As we leave Pauillac the road descends down towards the Jalle de Breuil in a gentle decline over a few hundred metres. On the left is Château Lafite-Rothschild, which sits in an elevated position, set well back and above the level of the road; all around and behind it, the Lafite-Rothschild vines climb up their gravelly mound. The decline bottoms out above the jalle, the channel which drains this section of Pauillac as well as the more southerly slopes of St Estèphe. And then the road begins to ascend again, climbing quickly now, as you head up onto the great gravel mounds of St Estèphe. To my eye, even though this is the least ‘complete’ of all the Médoc’s gravel beds, this is perhaps the most visually impressive; this is especially true when driving in from the west, on the D204, than it is when heading in from Pauillac. From that direction, the gravelly escarpment at the southern edge of the appellation appears in the distance, rising up between the trees. Only the gravelly slope behind Château Grand-Puy-Lacoste, at the western edge of Pauillac, is as convincing.

Regardless of what thoughts of gravel and drainage channels are running through your mind (don’t scoff – what else could you possibly be thinking of surrounded by all these famous châteaux and fabulous wines?) they will at this moment dissipate, like grains of sand in the wind. For as the road climbs again it begins to curve round towards the left. And as it does so, the decorative archways and pagoda-like towers of Château Cos d’Estournel come into view. Its golden sandstone exoticism has a tendency to gleam with a warmer hue not matched by other Bordeaux châteaux, which largely utilise the paler limestone, for many centuries the ubiquitous building material of the region. The ornately carved wooden doors, from the Palace of Zanzibar, are worthy of close inspection. They are difficult to do so when whizzing past in your hire car, but there is a very convenient parking bay opposite the château. It is rare to drive by without there being someone parked up there, aiming their camera at what is surely the region’s most photogenic frontage.

The Jalle de Breuil defines the southern boundary of the St Estèphe appellation, with a strip of poor-quality marshland devoid of vineyards on either side. This uncultivated corridor runs right down to the Gironde, although it also hooks back up towards the commune of German, wrapping itself around the vineyards of the aforementioned Château Cos d’Estournel (pictured below). This is the Marais du Crock, marais being French for marsh and crock being derived from the old French word croc (meaning hook, also the origin of croquet and crochet). It is no doubt how the nearby Château Le Crock got its name. 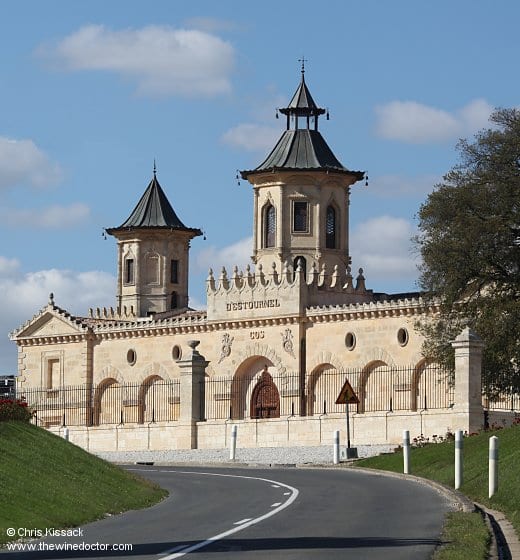 Further north, near the villages of Pez and St Estèphe itself, the gravelly mound comes to an end, as the land declines gently towards the Chenal de Calon. It is only a temporary break in the vineyards though, as on the far side is a tiny island of vines, gathered around the village of Saint Corbian. This is St Estèphe’s last gasp, and just to the north a wide strip of land, several hundred metres broad in places, marks the end of the appellation. Through the centre of this land runs the Estey d’Un, a significant drainage channel, one sufficiently broad enough to sail a small boat on (although the low road bridges would actually prevent you doing so). Beyond it are the vineyards of Saint-Seurin-de-Cadourne, and then further on again the Médoc.