Nestled in the tiny village of Saint-Estèphe is what appears to be, when viewed from the square upon which it sits, a very modest church. Built on the orders of Abbé Marc-Antoine Lalanne, who was made curate for this parish in 1751, construction began on the site of a pre-existing 11th-century church in 1764. Although its exterior has a rather unassuming appearance, the interior is lavishly decorated in the Baroque style, a fact that was no doubt relevant to the church having been classed a historic monument in 1995. To my eye the building itself has the typical appearance of a Médoc village church, being rather solid and functional in character, seemingly taller than its narrow frame deserves, and with that unique grey-yellow hue that the local limestone takes on with age. Nevertheless, whenever I approach it I find my eye drawn inevitably towards it, and in particular its tower.

In keeping with the overall design of the church its tower is square and rather stocky, but this effect is softened somewhat by the presence of a small dome atop its roof. Even more notable is the large cupola which sits above that, itself capped with a small dome and decorative finial, and these distinctive features make this a very attractive spire. It also means it is entirely unmistakable, being unlike any other church spire along the length and breadth of the Médoc. It therefore serves as a very good landmark for the village when approaching from the north, from the direction of St-Seurin-de-Cadourne (it is difficult to see from the south, as we are on the northern limits of Saint-Estèphe’s gravel mound here). 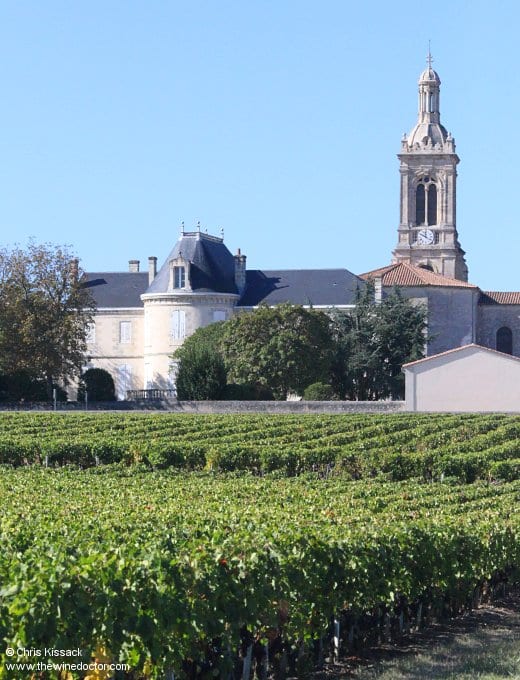 Somewhat overshadowed by the Église Saint-Etienne and its tower (pictured above, right) is a small château (pictured above, left), sitting at the rear of the church, behind the apse. Best viewed from below the village, in the vineyards that run down the slope to the Gironde, this rather elegant building was one which, until recently at least, was not one many Bordeaux drinkers were aware of. This is Château Capbern (for many years known as Château Capbern Gasqueton, but renamed in the 2013 vintage by new owners) an estate which – despite being in the same ownership as Château Calon-Ségur – for many years maintained an unusually low profile. It was only with the decision to release the wine en primeur, starting with the 2009 vintage, that the wine suddenly came onto the Bordeaux radar, and it was enthusiastically received. The previously unheralded Château Capbern, it seems, is to Château Calon-Ségur what Château Pibran is to Château Pichon-Baron, or what Château Potensac is to Château Léoville-Las-Cases. In other words we have a slice of winemaking savoir-faire from a team at a highly regarded classed growth estate, giving us good quality cru bourgeois wine sold at a fraction of the classed growth’s price. What more could we ask for? It is time, therefore, to check out this estate in more detail.