Standing in the baking midday heat, listening to the charming and energetic Didier Marcelis, the proprietor of Château Sérilhan, recount his story and that of this family-owned estate, had been a joy. Nevertheless, I was glad when Didier suggested we hop into his car for a whistle-stop tour of the region, if only to remove my slowly-crisping pate from the glare of the sun. A few moments later, with a brief spin of the wheels and a small spray of creamy-white gravel, we were off.

This tour was nothing less than madcap. Within a few minutes of our departure from Château Sérilhan we had arrived at Château Calon-Ségur. We had no appointment, but nevertheless drove onto the estate and right down to the château, one which I find appealing in terms of its very solid appearance, an effect sadly spoiled by its rather drab, grey exterior. But we were not here to linger, and one photo-opportunity later we had to move on (before the guard dogs were released, perhaps). A few minutes later we were at Château Montrose, and again we drove right into the heart of the estate, parking up next to the château. It wasn’t long before the gardener, who looked suspiciously as though he might be trained in martial arts, began to stare at us in a very irritated manner. Sensing imminent danger, once again we were on our way, this time en route for Château Cos d’Estournel. 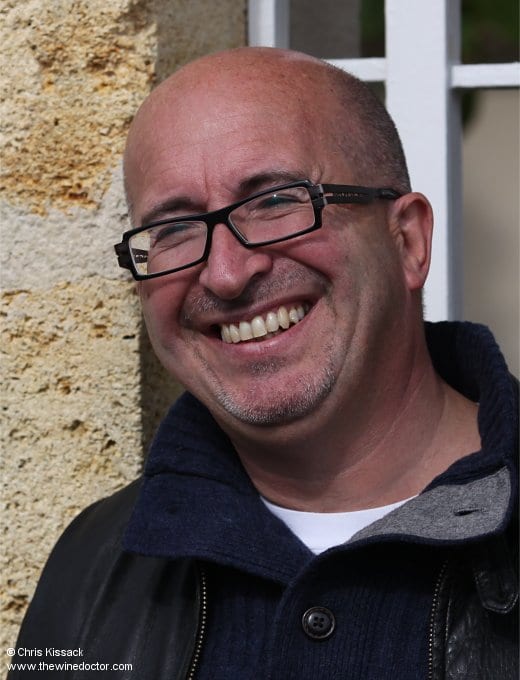 Being somewhat obsessive about exploring and understanding Bordeaux, and the terroirs on which these châteaux sit, I didn’t dare mention to Didier that I had visited all these châteaux before. Indeed, so regular had my driving up and down the D2 been this week, that this was about the fifteenth time I had glimpsed Cos d’Estournel in the space of only a few days. But that wasn’t really the point of the exercise I think; Didier wasn’t just showing me these famous names for the sake of it. He was showing me his world. You will notice that we did not make any visits, whistle-stop or otherwise, to Château Lilian-Ladouys, or Les Ormes de Pez, or Château Le Crock, despite the appeal of their wines or the facades of their respective châteaux. And that is because, I believe, these are not estates Didier regards as his peers, or at least exemplars to emulate. He is clearly a driven man, with ambitions, and I sense he is one who perhaps suffers no nonsense. Nevertheless, he is not blinkered to the realities of the world. He knows he does not own a Montrose equivalent, I am sure. But the location of these grand châteaux, in the case of Calon-Ségur literally just down the road from Sérilhan, the others not much further away, clearly means something to Didier Marcelis and his wines.

Our private version of the Gumball Rally over, we returned to Château Sérilhan. Here was a chance to learn a little more of Didier, and also an opportunity to taste one or two of his wines. Before moving on to my notes, however, as is customary I have a little background information on the domaine for you.