Rather like the Médoc project Goulée from the team at nearby Château Cos d’Estournel, Le Crock is one of those names that perhaps doesn’t work quite so well in English as it does in French. The origins of the name are far from certain, but seems to be relevant to the locality, as evidenced by the coexistence of the Marais du Crock, a hook-shaped area of marshland which cuts into the Saint-Estèphe heartland close to the hamlet of Marbuzet. This marshland wraps itself around the vineyards of Château Cos Labory and Château Cos d’Estournel and is contiguous with the marshy fields that run either side of the Jalle de Breuil, the drainage channel which passes just to the north of Château Lafite-Rothschild, and which forms the boundary between the Saint-Estèphe and Pauillac appellations. And it is at the tip of this hook of marshland that we find Château Le Crock.

It seems plausible that the old French word croc, meaning hook, is the origin of the crock in both Marais du Crock and Château Le Crock, just as it also gave us the words crochet (the modern French word for hook) and croquet (relating to the hooks pushed into the ground I think). The fact that the modern-day name Le Crock has evolved from the original term Cru de Croc, as used by a proprietor named Merman in the 1830s, lends a little weight to this theory. Nevertheless, the property did not begin life as Le Crock (or even Le Croc), nor did it originate with the Merman family. Its earliest recorded history evokes other names, some of which may be familiar to those who know the histories of the châteaux of Saint-Estèphe. 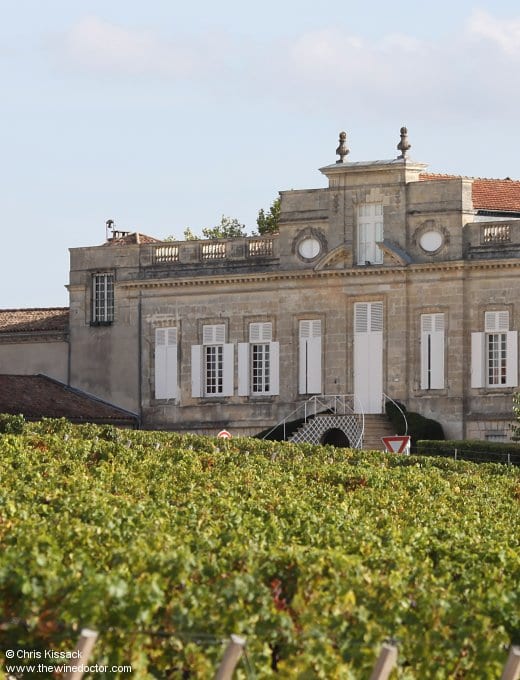 As is often the case this is another estate that began its life in the hands of a family of noble blood, in this case the Bastérot family who were active parliamentarians in Bordeaux. This was the situation during the 18th century, before this landscape was fully dedicated to viticulture, the fields used for growing of other crops, and certainly before the estate was blessed with the rather grand château (pictured above) that stands there today. The earliest known proprietor was Gabriel Barthélémy de Bastérot (born 1730), and upon his death the property was inherited by his daughter, Catherine de Bastérot (1750 – 1810), who had married Joseph Marie de Ségur (1744 – 1815), Comte de Ségur-Cabanac. Although viticulture was not predominant at this time the estate, known as the Cru de Bastérot-Ségur, was already establishing a reputation for its wine. Remarkably, considering its rather low-key reputation today, very early classifications saw it ranked equal to or ahead of the precursors of Château Lafon-Rochet, Château Phélan-Ségur and Château Cos d’Estournel.