On a corner of the D2, almost on the boundary between the Pauillac and St Estèphe appellations, sits the golden sandstone edifice that is Château Cos d’Estournel. Decorated with a triumphal archway and festooned with more pagodas than a Song Dynasty temple, it is a hotspot for visitors to the region, so much so that opposite the château there is a lengthy lay-by where drivers can park up before getting out to take the requisite photographs. On driving past it is rare not to see at least one happy photographer there, even in the depths of winter.

While these disciples of Bordeaux obsess over the magnificence of Cos d’Estournel, how many take a glance at the rather more traditional building just to its left, I wonder? It does not possess such a dramatic facade, and even what it does possess is mostly obscured by several large trees planted just a few metres from the front door; as a result, from the roadside, it is difficult to gain anything other than a view of the side of the château. Nevertheless, this is another of St Estèphe’s more significant estates, a sibling of Cos d’Estournel – the two have some shared history – and one of just five classed growth châteaux in the commune. In truth for many years the estate has lagged behind its neighbour not just on the basis of its rather dour architecture, but also on the quality of its wines. There have, however, been fleeting suggestions of improvement in recent years, and so this property – Château Cos Labory – remains an estate to watch.

Although ranked at almost opposite ends of the small spectrum of the 1855 classification, Cos Labory and Cos d’Estournel do have some common features, the most obvious being the name. As I have already explained in my profile of its more illustrious neighbour, Cos is most likely a derivative of caux, itself derived from colline de cailloux, meaning ‘stony slope’. In the Gascon tongue the end consonant is vocalised, accounting for how caux may have mutated into cos over the years. One particularly important Gascon in this story was Louis Gaspard d’Estournel, who is a key link between these two properties. Following the easing of some of his financial difficulties he returned to Cos d’Estournel in 1821, and flush with new funds he acquired numerous nearby plots of land, including those today belonging to Cos Labory, in 1847. But this point in Cos Labory’s history – which saw it stripped of its better vineyards when they were amalgamated into the Cos d’Estournel estate – was by no means its beginning. For that we must look back at least to the preceding century.

The domaine first appears in the history books as Cos-Gaston, named for the Gaston family who resided here. The patriarch Pierre Gaston ran a successful estate complete with vineyard, and there was commercial production of wine. On his death in August 1777 the property passed to his son Hyacinthe Gaston, one of three offspring, who went on to marry Anne Pauty. They resided at the estate for many years, subsequently bequeathing it to their only child, Marie-Sany Gaston. This was the route by which the estate eventually came to the Labory family, following the marriage of Marie-Sany to François-Armand Labory. It was a significant estate, with an annual production as high as 90 tonneaux (1 tonneau is 900 litres, so the equivalent of four modern Bordeaux barriques) of wine. In terms of production therefore, Cos Labory matched many of the larger estates of the Médoc of the era. 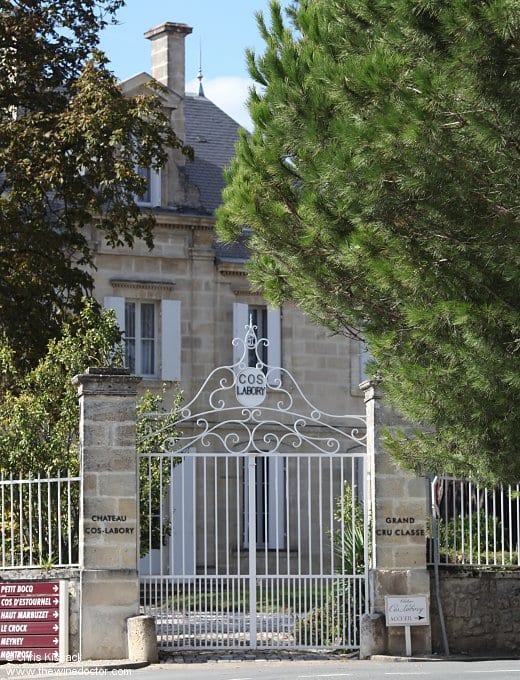 We can speculate that Marie-Sany wished to give her children something different from her own solitary childhood, as the couple had eight offspring. Unfortunately this did not make the matter of inheritance straightforward, and a family power struggle led to a series of court cases that were ultimately disastrous for the Laborys. In 1845 four of the eight children secured ownership, but within a month control switched to three others following a new hearing and, importantly, the submission of a higher bid. This deal fell through, however, opening the door to the aforementioned Louis Gaspard of Cos d’Estournel in 1847, who purchased the property for 200,000 francs, a bid considerably lower than the two linked to the family’s offers. I can only imagine its success reflected the solidity of the offer; those put forward by the different factions of the Labory family were perhaps more pipe dream than reality.