After Sauvignon Blanc, Chenin Blanc and Melon de Bourgogne, to which variety should we turn next? There are, as I have already alluded in my introduction to the grape varieties of the Loire Valley, many possibilities. With the likes of Folle Blanche, François-Saint-Meslier, Tressallier and Verdelho (to name just a handful) to choose from, Ligérian viticulteurs are not exactly short of options. There are, however, two varieties which to my mind stand out as being of particular interest, and both are strongly associated with the vineyards of Cheverny and Cour-Cheverny. One is Menu Pineau, generally (but not always) encountered within a blend. I will come to this variety in a moment, but first comes another variety which, like the ‘big three’ – Sauvignon Blanc, Chenin Blanc and Melon de Bourgogne – usually works in splendid isolation. That variety is, of course, Romorantin.

The one fact everyone (perhaps when I write ‘everyone’ I really mean ‘every Loire geek’) knows is that Romorantin was introduced to the region by François I, as I described when this famous French monarch was treated to a brief profile (yes, seriously) in the introduction to my Domaine des Huards report. In truth, however, there is no historical evidence to support this tale, which appears to be little more than a fable. We know that the thirsty king ordered 80,000 vines from Burgundy for planting in the region in 1519, but it seems to me that it is only in more recent times we have assumed these vines may have been Romorantin.

Having said that, the parentage of Romorantin certainly hints at (although far from proves) a Burgundian origin, being a natural cross between one of the Pinot family, perhaps either Pinot Noir or possibly even Pinot Teinturier, and the ever-fecund Gouais Blanc, seemingly a parent to almost every French variety of even the remotest interest. This genetic heritage means the variety is a sibling of numerous others which share the same parents, including Chardonnay, Melon de Bourgogne, Gamay Noir and many others. 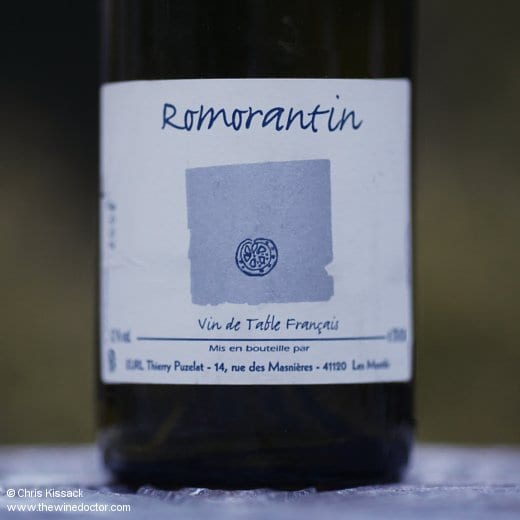 Locals around the towns of Romorantin-Lanthenay (for which the variety appears to be named), Cheverny and Cour-Cheverny in the Sologne are just as likely to tell you that the variety was introduced to the region during the early 19th century by a grower in nearby Villefranche-sur-Cher. Also supporting a later introduction to the region than 1519 is the first historical reference to the variety, which does not occur until 1868, as described by Pierre Rézeau in Le Dictionnaire des Noms de Cépages de France (CNRS Editions, 1997), the variety listed alongside Chenin Blanc, Arbois (i.e. Menu Pineau – see below for more detail) and others in a list of local varieties. The oldest surviving vineyard of Romorantin dates to around the same time, 1850, and is a parcel of ungrafted vines which seem to have escaped the phylloxera epidemic. Today they are in the possession of the Marionnet family, of Domaine de la Charmoise.