Over the last century the face of the typical Loire Valley domaine has changed dramatically. Look back in time to the early 20th century and although there were undoubtedly some domaines where viticulture ruled, the monoculture of vines that comes close to blanketing the côtes and coulées today simply did not exist. One hundred years ago polyculture was more the norm, a typical domaine being a smallholding where the vines justified their existence alongside fruit trees and vegetable plots, maybe even larger-scale farming of arable crops and livestock. Even some of the region’s most famous names, from Domaine de la Pépière in Muscadet up to Domaine Vacheron in Sancerre, started out in this manner.

Gradually, vigneron by vigneron, domaine by domaine, the region shifted away from polyculture and in some parts the vine began to dominate. This is especially so on the best slopes, the premières côtes of Saumur-Champigny and Vouvray of course, the south-facing coulées of Savennières, the best slopes of Sancerre, in many cases the planting driven by increased demand from new markets such as Parisian bistros, made accessible by an increasingly broad network of railways. Having said that, even in these prestigious appellations you can today still find some prime spots where the land is unplanted, or in some cases a once well-tended vineyard has been left to run wild. More often than not it is simply a question of finance; establishing and tending a vineyard is expensive, the returns are far from guaranteed especially in this marginal climate, and even when the growing season and harvest goes well the process is rarely a lucrative one. The bottles here, regardless of which appellation you have in mind, don’t sell for the same prices as those with Pomerol or Pommard on the label.

The laying of this blanket of vines across the Loire Valley has not, however, been an entirely smooth process; it has not been a simple shift from jack-of-all-trades polyculture to expert monoculture and winemaking, and quality has not always been the foremost concern. In some ways, while the vineyards expanded, the Ligérian mindset contracted, the aim being in some cases not to make the best wine but to have the easiest time of it. Thankfully today this mindset has, to some extent at least, been reversed.

This decline and to some extent the recovery is perhaps best exemplified by how viticulture in Anjou has changed during the 20th century. The vineyards had been wiped out by phylloxera during the latter decades of the 19th century, and it was now time to replant with grafted vines from the nursery, or as an alternative the American hybrids, now largely gone although you can still find them growing wild in the thicket next to many vineyards. The expense so incurred, at a time of looming war and great economic depression, helped to push some smallholders away from viticulture into other forms of agriculture, and so some domaines gave up on the vine altogether. Meanwhile, those who were committed to winemaking needed to up their game to ensure profitability, thus reinforcing the shift towards more productive, higher-yield and lower-overhead monoculture. 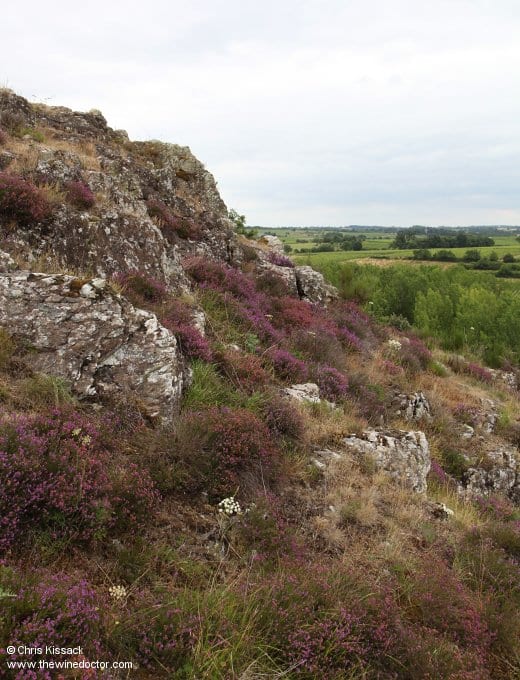 As a consequence, many of the better vineyards in some parts of Anjou fell into decline. The steep and rocky slopes (like those pictured above) that run down to the Layon have the best aspect, the best drainage, the best terroir overall, but they are laborious, time-consuming and therefore expensive to work. As whole-scale replanting was required anyway, many moved up onto the plains where larger vineyards could be established and worked more quickly and more cheaply, by horse and plough rather than by hand. And, of course, once affordable, the tractor replaced the horse. The fruit was picked early in one fell swoop, but Chenin really does best when picked later, in tries. The wines were perhaps not so good, but the raw acidity could be ameliorated by blending with ‘softer’ varieties, so the new appellation system that was being introduced enshrined Anjou Blanc as a blend of Chenin Blanc with Chardonnay or even Sauvignon Blanc. Although many vignerons working with an acid-rich sugar-deficient must will have opted for an easier route, chaptalisation, which covers all manner of flaws. Perhaps unsurprisingly, quality began to decline.