Man’s relationship with the vine and with wine goes back millennia. The most visually appealing evidence for this takes the form of depictions of both on Grecian drinking vessels and in Egyptian panels, taking us back several thousand years already. But in recent years more visceral evidence has been uncovered. At Tel Kabri in modern-day Israel, excavations have revealed a Canaanite palace dating to the Bronze Age (2000 – 1550 BC) was blessed with a wine cellar filled with jugs, analysis of the residues within proving that they once contained wine flavoured with honey and herbs. Not far to the north, in Georgia, the gateway between Europe and Asia, ancient earthenware winemaking vessels known as qvevri have been excavated which date to 6000 BC, a time when humans had barely shifted from the nomadic hunter-gatherer lifestyle to farming instead. Georgia may thus at least stake a claim, ahead of any other part of the world, as the cradle of humankind’s culture of the vine. The associated discovery of vine cuttings sheathed in silver among burial goods, all dating to 3000 BC, suggest the locals placed great cultural and perhaps also religious significance upon the vine.

This religious connotation is not surprising. For millennia – in fact, all the way though to the 20th century – winemaking was shrouded in mystery. Its effects on the human body were obviously very significant in the development of its cultural significance, but the mysterious process of transformation from fruit to alcohol also played some role. It was perhaps inevitable that man would develop a special reverence for wine.

Today, the sciences of viticulture and winemaking are much more completely understood, although much of this knowledge has come very recently; the pace of change during just the last century has been phenomenal. Today, there are entire books, not uncommonly in several volumes, and lengthy degree courses both of which exist to teach the complicated and multifaceted subjects of viticulture and winemaking. It should go without saying, therefore, that a couple of pages looking at winemaking in the Loire Valley will be nothing short of peremptory. Nevertheless it is worthwhile having a canter through the process of winemaking as in doing so we can pick out a handful of the more interesting, quirky or controversial areas as they apply to the this region for more detailed exploration.

In this first part, then, I look at white winemaking, beginning here with the early stages of the process. I start with picking, which for millennia was always a process carried out by hand, but today there are other options available. Then comes sorting and pressing, before I continue with the rest of the process in part two.

When it comes to picking, the obvious question is whether or not to pick by machine or by hand. Machine-picking is seen in all parts of the Loire Valley, but is perhaps more commonly encountered in Muscadet. In this most cash-strapped of regions it is for many vignerons the bottom line that counts, and machine-picking is a very cost-effective method of bringing in the crop compared to paying a team of pickers. It is also a very rapid process. Many vignerons in Muscadet are running very large estates, often 20, 30 or 40 hectares; this reflects the lower prices achieved in this part of the world, as in order to remain profitable a vigneron on the banks of the Sèvre, Maine or the Lac de Grandlieu needs to produce a larger volume of wine than his colleagues in Anjou or Touraine, who sell their Savennières or Chinon for much higher prices. 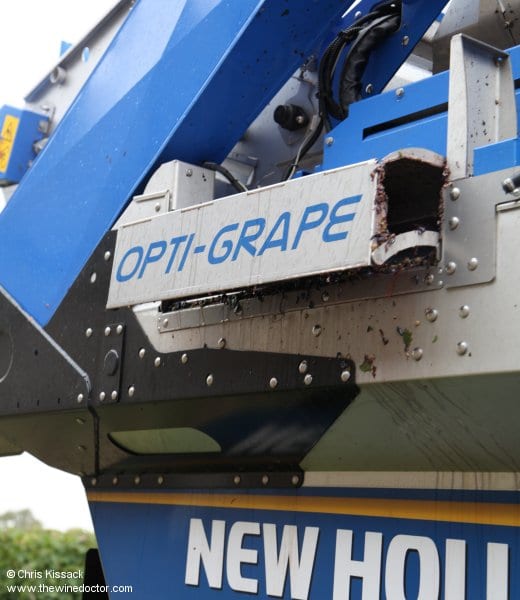 In many situations machine-picking may be chosen not just for the financial incentive but also on grounds of quality. In inclement weather, or if rot is taking hold in the vineyard, a machine can complete the harvest in a day or two, whereas a team of pickers might take more than a week, leading to lesser quality and perhaps even destruction of the whole crop if things are going really badly. Machine-picking can also be executed at night, saving more time, and bringing in cooler fruit than picking in the midday sun. There is also some evidence that, with particular relevance to Sauvignon Blanc rather than Muscadet’s Melon, machine-harvested fruit has higher levels of thiols (mercaptans) which give the variety’s more tropical grapefruit and passion fruit flavours. For Sauvignon Blanc made in a fruit-dominated style (rather than one more focused on minerality), that might be a real advantage.