In this instalment of my guide to the wines of the Loire Valley I want to continue exploring how red wine is made in the region. Rather than recount yet again all the processes involved, from picking the fruit to pulling the cork, I decided it would be more informative to look at some specific aspects of winemaking. With that in mind, in the preceding instalment I focused on carbonic maceration, a process perhaps most readily associated with the Beaujolais region but which is, in fact, practised worldwide, not least in the Loire Valley. There are plenty of Ligérian vignerons using carbonic maceration to soften their Gamay, but it is certainly not limited to that variety, as some also apply it to Cabernet Franc, Pinot Noir and more. Sometimes, even white varieties such as Melon de Bourgogne are treated to a little ‘carbo’ vinification.

Carbonic maceration is probably the most significant and also the most widespread deviation from what we might term ‘standard’ winemaking. It is certainly not the only such nuance to the making of red wine in the Loire Valley though, and here in this instalment of my guide I will look at two other practices we might encounter in this region. First up, I begin with a methodology which is, on a practical level, part-and parcel of carbonic maceration, and that is whole-bunch fermentation.

There was perhaps a time when whole-bunch fermentation was the norm. After all, in the pre-industrial era, before destemming machines (and all the other labour-saving devices on which we now rely so much) had been invented, the labour involved in manually destemming the freshly harvested fruit would certainly have been seen as an unnecessary task. This was certainly the case in Roman times, as we know from the writings of Cato the Elder (c.234 BC – 149 BC, his bust pictured below) that large-scale vinification commenced on an elevated concrete platform, the bunches pressed by wooden beams. The juice thus liberated ran off the platform and was collected in earthenware jars for fermentation. Smaller wine estates would press by foot, the fruit held in wicker baskets which allowed the juice to run out into the jars. Either way, there was no destemming. 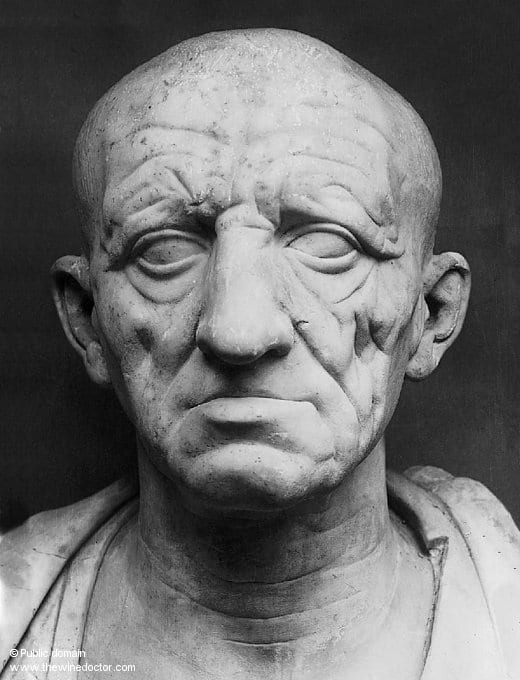 Of course this isn’t what we really mean by whole-bunch fermentation; in the above process there is no destemming, but the grape juice is being collected and fermented separately from the skins, stems and other solid matter. To find historical examples of true whole-bunch fermentation – in which grape solids, stems and juice are all kept together while the yeasts do their work – we need to consider less ancient times. Perhaps the most obvious time and place to look is Burgundy, through the Medieval period. Religious orders, in particular the Cistercians, were tending the vines of the Côte d’Or and making wines from vineyards still coveted by Burgundy addicts many centuries later. And the way these wines were made also mirrored current methods (more so than foot-pressing in wicker baskets, anyway) with the bunches deposited in large wooden vats; as the bunches were piled in those grapes at the bottom were crushed, releasing their sugar-rich juices, and fermentation – specifically, whole-bunch fermentation, including the stems – would begin.